Stolen babies: How a Memphis woman’s adoption scheme took from the poor for decades

A Women named Georgia Tann abducted more than 5000 kids, many of them poor and unwed, and separated them from their parents between 1924 and 1950. Tann looked like a grandma, and few families had any idea that she was actually a Tennessee baby farmer.

She and her network of social workers “spotters” were looking for kids during her period of working in the Tennessee Children’s Home Society. Tann was able to legally separate parents from their children by citing neglect. by quoting negligence With the help of politician & friends. The most attractive children were sold to wealthy families, including celebrities.

Hundreds of unwanted and unadoptable children died under Tann’s care, often due to neglect and starvation. It’s believed that some of the children’s bodies may still be buried on the grounds of the children’s home where Tann operated.

Tann spent more than 25 years kidnapping children and profiting off of the poor. Although she isn’t the first woman in history to separate children from their families, her story is one of the most bizarre and disturbing out there.

“It’s important to know who you are and why you’re here,” Jimmye Pidgeon said. “Everybody needs to know who they are.”

Pidgeon, who lives in Memphis, was adopted out by Georgia Tann to a wealthy, well-known family in 1942. Her birth mother surrendered her.

“At the time Shirley Temple was in style, so mother wanted a little girl to do her dancing and everything else that I did not turn out to be.” That was how Tann operated. A family had an order, Tann found a way for it to be filled.

Her customers were famous, like Joan Crawford, June Allyson, and Dick Powell. Tann ran the Tennessee Children’s Home Society, off Poplar Avenue, from the 1920s until her death in 1950.

“She had no respect for children when they were poor,” Barbara Raymond said. “She did not treat them well. Children died in her care.”

Raymond, an author of “The Baby Thief: The Untold Story of Georgia Tann, the Baby Seller Who Corrupted Adoption,” spent 17 years studying and investigating the life of Tann. She’s also an adjunct professor at John Carroll University in Ohio.

“It really is a story that’s almost stranger than fiction.”

Raymond says Tann, driven by her hunger for power and money, was backed by powerful leaders in Memphis. She would prey on poor families, promising to take sick children to the doctor but those children never returned home. 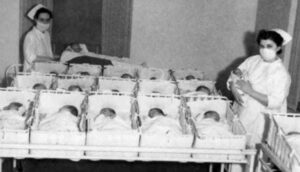 “Women then waking up from what they said was twilight sleep would be told that the baby was born dead and the mother would say, ‘No I heard a baby.’ And they would say ‘Oh no that was another baby. We know you’re poor. The state put the baby in the ground.'”

In one three-month period in 1945, Raymond said 40 to 50 children died because she would not separate the sick babies from the healthy babies. In fact, she would put them all in the same crib. She would put five to six children in one crib. If one kid was sick, soon they would all be sick.

Tann’s wrath has been made into a movie before — in 1993, Mary Tyler Moore won an Emmy award for playing Tann in a TV movie called “Stolen Babies.” Raymond says she’s been contacted by Academy Award-winning actress Octavia Spencer, who is interested in turning this sad story into a movie.

“I think it’s great and I think it will reveal so much to people who are absolutely clueless as to what it involves to get a child and be a good parent,” said Pidgeon. Pidgeon, who calls herself lucky, wrote a book herself about her experiences. She hopes people can learn from Tann’s painful legacy.

Raymond hopes awareness for adopted children’s rights is brought to the forefront. Raymond has also been speaking with others who are interested in revisiting and investigating the case of Georgia Tann.