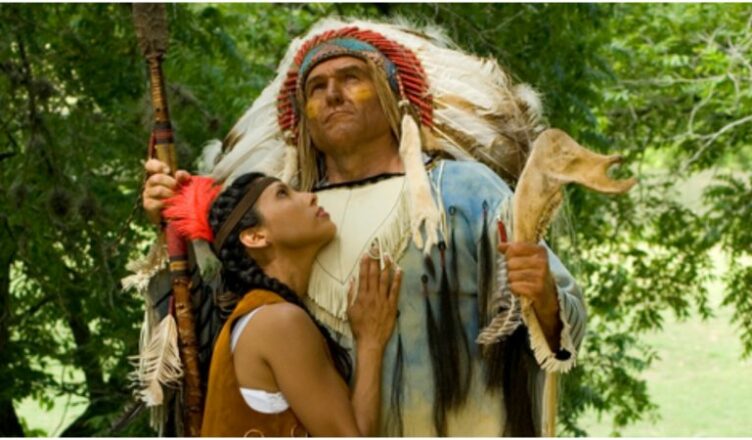 The Princess of Smith, who saved the life of the Englishman John Smith, married the John Rolfe and nurtured peace between British and Native Americans, is also remembered as the Native American Powhatan.

Disney published in 1995 a magnificent animated film that shows the events between John Smith and Pocahontas.

Although Disney is known for creating fictional tales, many people believe that Disney’s account of the life of Pocahontas was a true reflection of past events: the love between Pocahontas and John Smith, the bravery Pocahontas showed when saving John Smith’s life, and the tragic ending when John Smith returned to England for medical treatment.

However, this depiction is a far departure from the actual events that occurred, and from the real life of Pocahontas.

It is believed that Pocahontas was born around 1595 to a Powhatan chief. Her given name at birth was Matoaka, although she was sometimes called Amonute.

“Pocahontas” was a derogatory nickname meaning “spoiled child” or “naughty one.” Matoaka’s tribe was a part of a group of about thirty Algonquian-speaking tribes located in Tidewater, Virginia. During Matoaka’s childhood, the English had arrived in the ‘New World’ and clashes between the colonizers and the Native Americans were commonplace.

In 1607, John Smith, an Admiral of New England and an English soldier and explorer, arrived in Virginia by ship, with a group of about 100 other settlers. One day, while exploring the Chickahominy River, John Smith was captured by one of Powhatan’s hunting parties. He was brought to Powhatan’s home at Werowocomoco.

The accounts of what happened next vary from source to source. In John Smith’s original writing, he told of having a large feast, after which he sat and spoke with Chief Powhatan.

In a letter written to Queen Anne, John Smith told the story of Matoaka throwing herself across his body to protect him from execution at the hands of Powhatan. It is believed that John Smith was a pretentious man who told this lie to gain notoriety.

In the Disney version, Matoaka/Pocahontas is depicted as a young woman when she saved John Smith, but by his accounts, she was only a 10-year-old child when these events occurred, and therefore highly unlikely that there was any romance between them.

Matoaka often visited the settlement at Jamestown to help the settlers during times when food was in short supply. On 13 th April 1613 AD, during one of these visits, Samuel Argall captured Matoaka to ransom her for some English prisoners held by her father.

She was held hostage at Jamestown for over a year. During her captivity, tobacco planter John Rolfe took a ‘special interest’ in the attractive young prisoner, and he eventually conditioned her release upon her agreeing to marry him.

Matoaka was baptized ‘Rebecca’ and in 1614, she was married John Rolfe – the first recorded marriage between a European and a Native American.

Two years later, John Rolfe took Matoaka to England to use her in a propaganda campaign to support the colony of Virginia, propping her up as the symbol of hope for peace and good relations between the English and the Native Americans. ‘Rebecca’ was seen an example of a civilized ‘savage’ and Rolfe was praised for his accomplishment in bringing Christianity to the ‘heathen tribes’.

While in England, Matoaka ran into John Smith. She refused to speak with him, turning her head and fleeing from his presence – a far cry from the undying love between the two as portrayed in the Disney movie.

In 1617, the Rolfe family boarded a ship to return to Virginia. However, Matoaka would not complete this journey home. She became gravely ill – theories range from smallpox, pneumonia, or tuberculosis, to her having been poisoned – and she was taken off the ship at Gravesend where she died on March 21, 1617.

It is believed she was 21 years old when she died. Sadly, there was no fairy tale endings for Matoaka.

The real story of ‘Pocahontas’ would make a greater movie than the one produced by Disney, as her tragic life