The Tragic Full Story Behind The Death Of Marilyn Monroe:

Marilyn Monroe was instantly recognizable, even to people who had never seen a single one of her movies. She was married to Joe DiMaggio, friends with Frank Sinatra, and beloved by fans all over the globe.

The glamorous celebrity seemed to have it all.That’s why the news of Marilyn Monroe’s death on Aug. 5, 1962, at the age of just 36 — apparently by her own hand — rocked the world. And more troubling still were the rumors and theories claiming that she may have even been killed.

But what is the truth about the death of Marilyn Monroe? 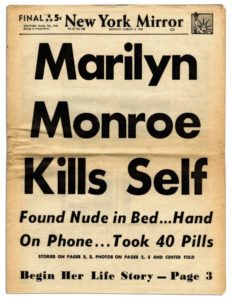 The Death Of Marilyn Monroe

Marilyn Monroe’s housekeeper, Eunice Murray, slept at the movie star’s Los Angeles home on the night of Aug. 5, 1962. Murray became concerned when she woke up at 3 a.m. to find the light still on in Monroe’s room.

After testing the door and finding it locked, the housekeeper began to knock and shout Monroe’s name.

Greenson rushed to Monroe’s home and managed to break through her bedroom window. When he climbed through, he found Hollywood’s biggest star naked under the sheets and clutching the telephone.

He calmly called out to Murray, “She appears to be dead.”

Monroe’s bedside table was littered with a myriad of medicine bottles, prompting Greenson to call the actress’s physician, Dr. Hyman Engelberg, who pronounced her dead and then phoned the police, who arrived at around 4:30 a.m.

By the time the sun had risen, the yard was swarming with reporters.

Following the death of Marilyn Monroe, her body was taken to the Los Angeles County coroner’s office where an autopsy was performed that same day.

The toxicology report, which came back later that night, showed that the actress’s blood contained the sleeping pill chloral hydrate and her liver showed the presence of the barbiturate Nembutal.

Because these levels were much higher than the fatal dose and because the pills had been ingested “within a short period of time” (as little as a minute), the coroner ruled that Marilyn Monroe’s death was a “probable suicide.”

The initial police report stated that the death of Marilyn Monroe may have been accidental, though an investigation soon likewise concluded that it was probably suicide.

And though she grew up to be rich and famous, the inner darkness that first took root during her childhood never left her.

Nevertheless, by the 1950s, Marilyn Monroe was one of Hollywood’s biggest stars and her films had grossed the modern equivalent of approximately $2 billion.

Yet even with all of this fame and fortune, she was still deeply troubled.

She suffered from anxiety and depression, turning to drugs and alcohol for help.

Monroe’s close friend James Bacon recalled how one night he observed her overindulging in a self-destructive way:“[Monroe] was drinking champagne and straight vodka and occasionally popping a pill…

I said, ‘Marilyn, the combination of pills and alcohol will kill you.’ And she said, ‘It hasn’t killed me yet.’ Then she took another drink and popped another pill.”

Monroe’s drug intake soon made it difficult for her to remember lines and would often result in her failing to show up to the set on time or at all. This behavior even led to her being fired from her last movie, Something’s Got to Give.

Given her history of depression and substance abuse, it wasn’t hard to believe that the death of Marilyn Monroe was indeed a suicide or at least a tragic accident for a woman who’d finally taken one too many pills and had one too many drinks.

Yet from the start, there were some who staunchly refused to believe this had been the case — and instead suspected foul play.

Suspicions Of Murder And A Cover-Up

Friends of the star, among others, soon began claiming that the official report on the death of Marilyn Monroe was a lie and that, in fact, there was a cover-up and she had actually been murdered.

Bacon, who saw the star only a few days before her death, said she was in high spirits. “She wasn’t the least bit depressed,” he said. “She was talking about going to Mexico.”

Another friend, Pat Newcomb, said she had been with Monroe just the night before her death and that they had made plans to go to the movies the next day. “Marilyn was in perfect physical condition and was feeling great,” Newcomb said.

The star had also recently rekindled her romance with ex-husband Joe DiMaggio and was excited about several new projects that had been offered to her, as well as her being re-hired on Something’s Got to Give.

As one of her associates asked, “Does that sound like she was depressed about her career?”Reporters were also quick to point out that no suicide note was ever found.

The autopsy report was also treated with suspicion upon its release. Although Monroe died after supposedly ingesting a large number of pills, there was no trace of any of the capsules in her stomach.

Even the junior medical examiner who performed the autopsy, Thomas Noguchi, had enough doubts that he later called for the case to be re-opened.

Over the following decade, so many well-outlined conspiracy theories about her death emerged in various reports and books that in 1982, the Los Angeles Country District Attorney’s Office ordered a new investigation into the death of Marilyn Monroe.

Although this 1982 report concluded that the evidence reviewed “fails to support any theory of criminal conduct,” it also admitted that the investigation had turned up some “factual discrepancies and unanswered questions.”

TheorySo if Marilyn Monroe did not die by her own hand, whether accidentally or otherwise, who do these conspiracy theorists think killed her?

Although the motives and details vary between theorists, many agree on one thing: The only person with the power and resources to cover up the death of one of the world’s biggest movie stars was none other than the president of the United States himself.

John F. Kennedy and his brother Robert had both allegedly had sexual relations with Monroe, a fact she reportedly divulged to her close friends and psychiatrists.

According to some theories, the Kennedy brothers became terrified that the increasingly unstable Monroe would reveal their affairs and thus had her killed.

Most of the conspiracy theorists agree that the murder was actually committed through a fatal injection of barbiturates, a theory seemingly supported by the lack of capsules found in Monroe’s stomach, as well as by a small, mysterious bruise that was never explained, found on her lower body.

Although nearly six decades after Marilyn Monroe’s death, new eyewitnesses are supposedly still emerging, the story of her tragic demise has only fueled her legend. The star lives on in conspiracy theories and wild speculation to this day.