The shockingly unspoiled Peruvian tomb of the Lord of Sipan, Mochican Warrior Priest.

In 1987, at an archaeological site in Huaca Rajada near Sipán, on the north coast of Peru, an immense complex of unplundered Moche cultural tombs was uncovered.

The most famous tombs were held by the Lord de Sipán, a Mochican warrior priest who, as in the area before, was buried amid the sparkling jewels.

Before discovering the famous Moche leader, archaeologists were met by a Guardian – the remains of a man with a copper helmet and a shield. He was buried in a seated position and his feet amputated to prevent him from leaving his seat. At the time, the researchers had no idea of the opulent riches that lay beyond the Guardian. 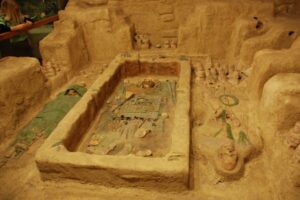 Eventually, excavators came upon a tomb, a 5m x 5m chamber, still sealed, with a wooden sarcophagus in the centre – the first of its type to be reported in the Americas. Within the coffin, lay the remains of a man dressed in full royal regalia, surrounded by a plethora of dedicatory offerings that were to accompany him in his afterlife. 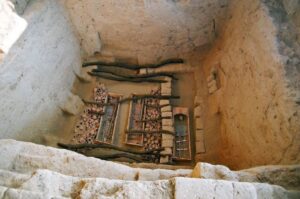 An analysis of his regalia and iconographic depictions found in his tomb, suggests that this man was a high ranking Moche warrior-priest and a pre-eminent ruler of the Lambayeque valley. This mighty noble, who was probably viewed by his people as having god-like powers, became known as the Lord of Sipán.

The Lord of Sipán was aged 35-45 years old at the time of his death, and is known to have ruled the Lambayeque Valley in the late 3 rd century AD. The elite leader was found adorned in gold, silver, and copper jewellery and ornaments, including an enormous crescent headdress with a plume of feathers, a face mask, several pectorals composed of hundreds of shell beads, necklaces, nose rings, ear rings, a gold and silver sceptre, banners of gilded metal sewn onto cotton cloth, and two backflaps, which are trapezoidal sheets of beaten gold that warriors wore attached to the back of their costumes. 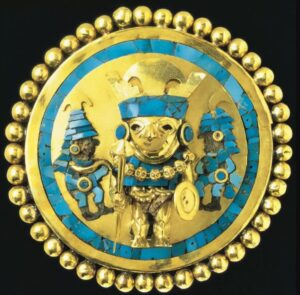 Also buried with the Lord of Sipán were many ceremonial utensils such as tropical sea shells, silver and gold rattles, knives, golden death-masks, gold bells showing a deity severing human heads, three other headdresses, and hundreds of beads. A total of 451 gold, silver, copper, textile, and feather objects were buried with the Lord of Sipán to accompany him in the afterlife. 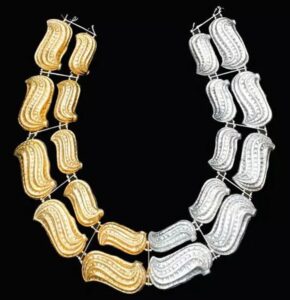 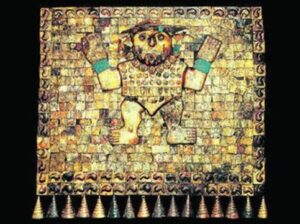 As excavations progressed, archaeologists soon discovered that the Lord of Sipán was not alone. Buried with the warrior priest were six other people: three young women dressed in ceremonial clothes placed at the head and foot of his coffin (possibly wives or concubines who had apparently died some time earlier), two robust males with amputated feet on the long sides (possibly warriors who were sacrificed to accompany their lord), and a child of about nine or ten years of age, placed at the head of his coffin.

The remains of a third male was later found on the roof of the burial chamber sitting in a niche overlooking the chamber. There was also a dog, which may have been the Lord of Sipan’s favorite pet, and two llamas, which were probably offerings.

The following year, in 1988, a second tomb was found and excavated near that of the Lord of Sipán, which contained an individual whom archaeologists concluded was also a Moche priest, second only in status to the Lord himself, surrounded by a Guardian and two women.

He was buried with numerous ritualistic objects, including a cup or bowl for collecting the blood of sacrificial victims, a metal crown adorned with an owl with its wings extended, and other items associated with worship of the moon. Around his neck he wore a made from small golden pendants with human faces that strike a variety of expressions.

Discoveries continued to emerge. Buried beneath 16 layers of the finest ornaments and clothing, archaeologists found a third tomb, which was slightly older than the other two. The golden treasures and ornaments accompanying the deceased revealed that this individual was of the same or similar rank as the Lord of Sipán, and DNA analysis has shown that the two were related.  As a result, the archaeologists named this third individual ‘The Old Lord of Sipán’.

The Old Lord was accompanied by a young woman and a Guardian and, while his tomb was more subdued than that belonging to the Lord of Sipán, it contained the finest metalwork found at the site, including many pieces made of thin, hammered plates of gold, and gilded copper and alloys.  The ability to do this type of gold alloying was not discovered in Europe until centuries later.

Among the most precious relics were a tiny gold figurine holding a shield and club, wearing a turquoise inlaid shirt, an owl headdress and moveable nose ornament, and a finely crafted necklace made up of golden spiders.

By 2007, a total of fourteen elite tombs had been found at Huaca Rajada and it seems quite clear that many more are still waiting to be found. The goods found within them are so extensive that a large museum has been constructed which is entirely dedicated to highlighting this incredible discovery which sheds light on the culture, religion, and technology of the Moche civilization. The Royal Tombs Museum of Sipán was constructed in nearby Lambayeque to hold most of the artifacts and interpret the tombs.