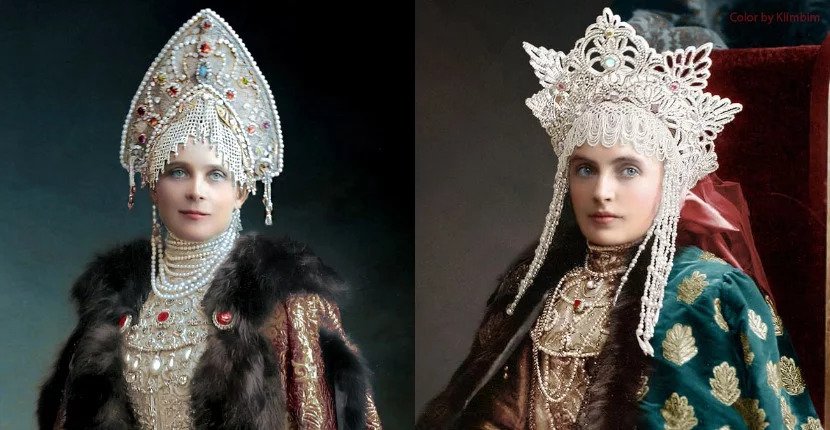 Dazzling Color Photos of the Legendary Romanov Costume Ball of 1903.

The members of the Romanov dynasty and the cream of the Russian aristocracy collected for a fancy-dress costume ball in February 1903, one that in its sheer opulence was nearly blinding.

Outside the Winter Palace, the social pressures that would hurl the country into revolution were intensifying, but 14 years before the forced abdication of Czar Nicolas II, the society of St. Petersburg put on quite a show, dubbed by many Europe’s “last great royal ball”.

The 1903 costume ball was dedicated to the 290th anniversary of the Romanov dynasty, which was at the time one of Europe’s oldest ruling families and almost certainly the one with the most absolutist powers.

Russian artist Olga Shirnina has brought this ball to life with some amazing colorized images.

A party given on February 11, 1903, in the Winter Palace was followed two days later by a grandiose fancy dress ball. Called “The 1903 Ball,” it remains the most celebrated festivity arranged in St. Petersburg during the reign of Nicholas II, the last Romanov.

For the Romanov costume ball, guests took 38 original royal items of the 17th century from the Armory in Moscow to use in this 1903 extravaganza.

Nicholas himself was robed in the gold brocade of 17th-century Russian tsar Alexey Mikhailovich, and his wife, Alexandra, wore the raiments of the first wife of Alexey Mikhailovich, Empress Maria Ilinichna. The 20th-century czarina was born in the German royal family of Hesse, and she was a granddaughter of Queen Victoria.

The Czarina’s dress of brocade, decorated with silver satin and pearls topped by a diamond and emerald-studded crown. She also wore a huge emerald.

All the jewelry was chosen by court jeweler Carl Faberge. It is estimated that today this dress would cost approximately 10 million euros. Nicholas and Alexandra had been married nine years at the time of the ball and were the parents of four girls: Olga, Tatiana, Marie, and Anastasia.

The year after the fancy dress ball Alexandra gave birth to a son, Alexei, but he had hemophilia, a genetic disease that was painful and difficult to treat and which his distraught parents tried to hide.

Although dozens of Romanovs gathered at the ball to dance and celebrate, Alexandra was not popular with her husband’s family at the time, and the Russian dislike of her would intensify through the next decade and more. She did not fit into St. Petersburg high society.

Robert K. Massie, in his award-winning book Nicholas and Alexandra, described the St. Petersburg of the turn of the century: “It was the center of all that was advanced, all that was smart and much that was cynical in Russian life.

Its great opera and ballet companies, its symphonies and chamber orchestras played the music of Glinka, Rimsky-Korsakov, Borodin, Mussorgsky, and Tschaikovsky; its citizens read Pushkin, Gogol, Dostoyevsky, Turgenev, and Tolstoy.

But society spoke French, not Russian, and the best clothing and furniture were ordered from Paris…The ‘season’ in St. Petersburg began on New Year’s Day and lasted until the beginning of Lent.”

In the vast countryside, however, could be found poverty and political repression. “While we were dancing,” later recalled Grand Duke Alexander Mikhailovich, brother-in-law of Czar Nicholas, “workers’ strikes were happening in St. Petersburg, and clouds were gathering over the Russian Far East.”

The Grand Duke Alexander, called “Sandro,” fled to Crimea with his family after the Russian Revolution; they were rescued by the British battleship HMS Marlborough in 1919. Czar Nicholas and his family were unable to escape. After months of imprisonment, the entire family met their end in the basement of a house in Ekaterinburg on July 17, 1918.