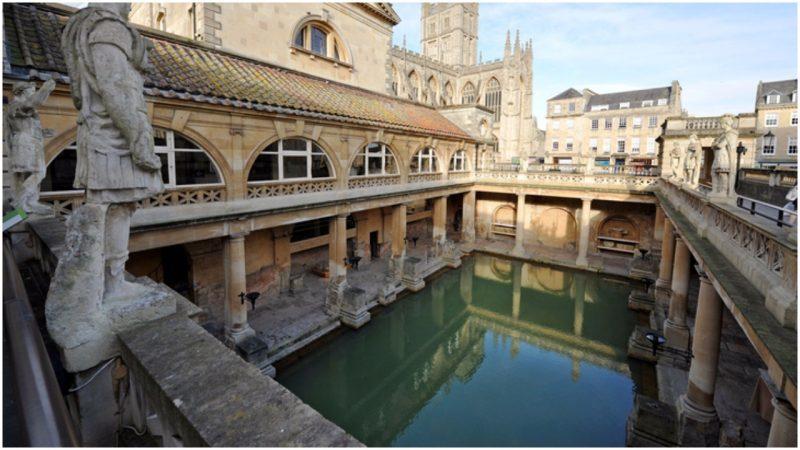 The Bath House, founded by Romans in 75 AD, jointly dedicated to Celtic and Roman goddesses

The Ancient Romans proved to be masters of architecture, and they created numerous monumental buildings, some of them in surprisingly good condition, by always adopting new techniques and using new materials.

In a short period, the Romans changed the face of the European continent forever. The widespread use of concrete was probably the greatest of all innovations introduced by the Romans in the field of architecture.

The Ancient Romans were convinced that their Empire would last forever, so it’s no surprise that they built things to last. Well preserved Roman remains can be found almost everywhere in the territory of the former Empire, but few of them can match the condition of the Roman bathing complex in the city of Bath, England, which is undoubtedly one of the best-preserved of the remain.

Situated in the County of Somerset, the city of Bath has mysterious origins. According to legend, it was founded back in 863 BC by Bladud, the 8th  king of the Britons, who miraculously cured himself of leprosy after bathing in the springs. Afterward, he moved his court there.

Bath’s hot-water springs are one of a kind in England. The site was considered sacred by the Celtic people who arrived in the area about 700 years prior to the Roman occupation. They attributed the healing power of the springs to the Goddess Sulis and erected shrines in her honor.

They began building a complex on the sacred site after the Romans arrived in what is now Bath around 43 AD, naming it Aquae Sulis, translated into “the Waters of Sulis.”

The Romans apparently realized the importance of goddess Sulis to the people of southwestern England and decided to dedicate the site to both Sulis and the Roman goddess of healing, Minerva. Thus the goddess Sulis Minerva was born.

The bath and temple complex at the springs was founded in 75 AD and it did not take long before it attracted people from the entire Roman Empire. The sacred springs became known for their power in relieving illnesses, and over the years the bath complex became a favorite resort retreat for Romans.

With the decline of the Roman Empire, the complex deteriorated and the baths silted up. Life in the town of Bath continued after the Romans left England in 407 AD, but it took over 1,000 years before the bath complex was finally repaired and bathing became fashionable again in England.

It was Oliver King, Bishop of Bath and Wells, who came up with the idea to rebuild the complex in 1500, but it was never brought to its full Roman era glory.

Over the following years, the complex became a beautiful resort and fashionable spa. It started attracting royalty and aristocratic families from all over Britain. In the Georgian period, new architecture created in Bath stunned all who came there. In Jane Austen’s fiction, Bath is an important destination. She set two of her novels there, Persuasion and Northanger Abbey, and Austen herself lived there from 1801 to 1806.

The city of Bath was a major tourist destination. Soon more space was needed and when construction began, the ancient Roman foundations were discovered. It was a discovery unlike any other and it became one of Bath’s main attractions, largely contributing to the popularity of the town.

Tourists now come from all over the world to see the complex, which consists of a Roman Temple, the Sacred Spring, the Museum, and the Roman Bath House. Of course, the Bath House remains the most popular attraction.

Bathing in the Roman Baths is not allowed as it is unsafe, but seeing the best-preserved and most famous Roman monument north of the Alps is worth a visit.