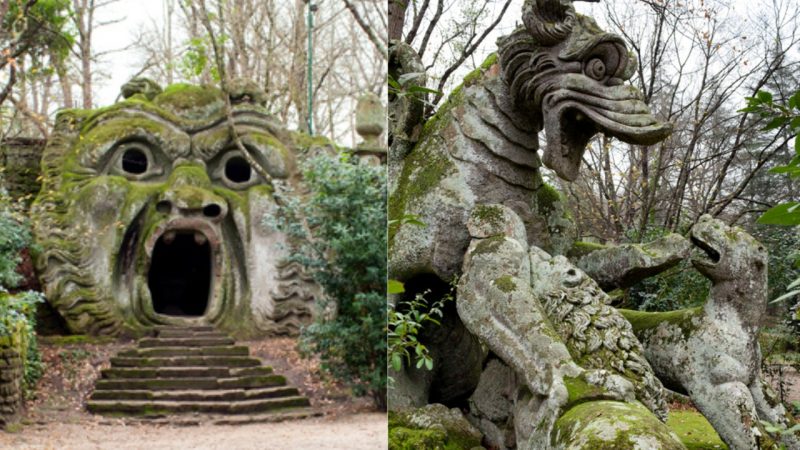 An Italian duke created the Park of Monsters, filled with stone creatures, as a way of coping with his wife’s death

The hills of the Lazio region, just north of the small town of Bomarzo in central Italy, are home to a surreal garden of giant stone creatures.

A snarling dragon in a death grip with a pair of lions. A queasily leaning house. A gaping Orcus—or hell mouth—with words inscribed above the maw: “All reason departs.” These are among the more than 30 disturbing moss-covered stone sculptures in a mysterious 16th-century garden locals call the Park of Monsters, in Bonzaro, Italy, about 50 miles north of Rome.

Did this monstrous vision emerge out of creator Vicino Orsini’s sense of competition or a deep-seated depression? Historians still debate the point today.

Pier Francesco “Vicino” Orsini, born in 1523, was a patron of the arts, or condottiero, and the Duke of Bonzaro. In the mid-1500s, Orsini’s privileged life took a dark turn.

As a general in the Pope’s army during the Italian Wars, he engaged in violent military campaigns; during a battle in Artois, a town in northern France near the border of Germany, his commander and close friend, Orazio Farnese, was killed. Orsini himself was captured by the Germans and spent several years enduring who knows what as a prisoner of war.

Upon Orsini’s release and his return to Bomarzo, he distanced himself from formal religion.

He converted to Epicureanism, a philosophy devoted to simple pleasures as defined by the absence of pain and the advocacy of a moderate life, and surrounded himself with artists, writers, and other creative people.

Together with the Papal architect and Renaissance garden designer Pirro Ligorio, Orsini began laying out plans for Sacro Bosco in 1552. But Orsini rejected the customs of the time.  Instead of neat symmetry, restrained hedgerows, ornate fountains, and heroic Roman gods, he had a more turbulent and modern vision.

For starters, Orsini left the native trees and shrubs in place. He filled the garden with stone creatures more from a nightmare than a dream.

The macabre sculptures he commissioned were scattered about the acreage in a seemingly random fashion.

Some historians say the gardens’ grotesquerie was inspired by visions in classical literature with which Orsini was well-versed, such as Virgil’s Aeneid and Ludovico Ariosto’s Orlando Furioso, works that depict an intermingling of nature and art.

Others suggest that he was intentionally creating a counterpoint to the light and uplifting gardens of his friend Cardinal Cristoforo Madruzzo in the nearby town of Soriano di Cimino. (If they were rivals, they were friendly: The Leaning Tower sculpture in Orsini’s garden is dedicated to Madruzzo.)

An octagonal Temple of Eternity is devoted to his beloved wife, Giulia Farnese, who died shortly after his release from prison. Some say Orsini created the garden as a way of coping with his grief.

A belvedere stands near the heart of the garden, with a small staircase winding down its side, according to the BBC. “And all other marvels prized before by the world yield to the Sacred Wood that resembles only itself and nothing else.”

“Rather than seeking a unified narrative message, it is more appropriate to take our cue for meaning from the relationship between the carved inscriptions in the garden and the sculptures they accompany, which Orsini surely intended,” Melinda Schlitt, art history and humanities professor at Dickinson College in central Pennsylvania, told the BBC. “[This poetry] urges the visitor not to search for resemblance to other ‘marvels’ outside of the garden itself.”

During the 19th and early 20th centuries, the park fell into disuse, and the trees and shrubs overgrowing, and the sculptures becoming covered in moss. But its decay made it even more surreal, which appealed to the artist Salvador Dali. He made a movie about the park in 1948 and referenced the sculptures in a later painting.

Today the park is a major tourist destination. Several films have used unique sculptures as the backdrop, including Frankenstein’s Bride and The Relic.