The Ornate 1,000-Year-Old Viking Necklace Of A Pagan ‘Sorceress’ goes on display: 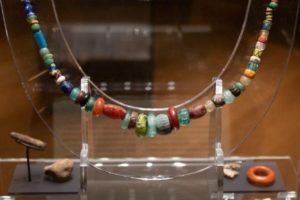 A magnificent piece of jewelry that the mighty Vikings created a millennium ago may have belonged to a mysterious pagan sorceress. It is now on display at the York, England Jorvik Visitor Center.

The piece is a necklace with some 51 beads of glass, jet and amber, all of which radiate different colors. It resurfaced more than three decades ago in the midst of archeological digs on a site on Peel Castle.

The Peel Castle was originally built by Vikings during the 11th century A.D. on St. Patrick’s Isle of Man, in the Irish Sea, but the necklace is older than that.

As the BBC reports, this is the 1st time the necklace has moved away from the island, to be displayed at the Jorvik Visitor Center within an exhibition highlight Viking women.

The center has been “really thrilled” for loaning the piece from the Manx National Heritage (MNH), said their marketing manager Beth Dawes.

“It is absolutely beautiful. I have been saying that I would wear it myself,” commented Dawes, according to the BBC.

The delicate-looking necklace combines a unique mix of beads. It is the diversity of beads that makes it so noticeable.

The gemstones used for it have been collected from England, Ireland, the region around the Baltic Sea but also places as remote as the Middle East indicating complex trade relations of the Middle Ages.

The piece also testifies to the surprisingly high-status women existed in that culture and era. Besides appealing to the eye, the centuries-old piece of jewelry has been further associated with spirituality.

In 1984, it resurfaced from a stone lined burial site which suggested the woman who once pledged ownership on it may have been a pagan sorceress. Or, in the vocabulary of Norse religion–she likely was Völva, a female shaman, laid to rest with the assets of her occupation.

While her grave is dated to the mid-tenth-century A.D., part of the beads on the necklace have been dated several centuries earlier than that. Within her site of burial, other grave artifacts discovered included a tiny set of pestle and mortar and fossil ammonite charm.

The woman might have been “a shaman sort of person who would have told fortunes and been very involved in rituals and religion,” Dawes also said. As someone holding divine connections and healing knowledge within the community, the woman could have actually been compensated with stuff such as beads for her services.

This necklace’s owner is also sometimes referred to as ‘ Pagan Lady. ‘ Another mysterious aspect of her story is that her final resting place was a Christian cemetery apart from the connection with paganism.

Her burial looked pretty rich for a woman, which is what persuaded archeologists and other experts that she was an eminent woman, a woman of great importance among her people, especially in terms of spirituality and religion.

The rare find of the necklace has propelled plenty of discussions among experts about the role women had in Viking society already. Which only adds more value to it as one of the most authentic artifacts ever retrieved from the Isle of Man.

During Pagan Lady’s day, it was more or less only men who received burials denoting the high status.

Earlier interpretation of the necklace said that the woman had received the piece as a gift from someone close to her. Like her spouse who may have been on the road quite often, as well as that she was “something of a domestic Goddess, someone who was in charge in the home,” according to BBC.

Further research into similar burial sites made it clear that the woman had to be significant to her community. In general, in terms of female empowerment, the Viking society was more advanced. Other societies of the Middle Ages would lag behind.