A famous series of photographs came out during 1915, depicting a number of lumberjacks working on the giant redwoods of Humboldt County, California. This was the time when tree logging was at its peak.

The photos that were taken are still a part of the Library Special Collections in the Humboldt State University. The series of pictures, taken by A.W. Ericson, highlights the years from 1880 up until the 1920s.

Before the advent of modern chainsaws and logging machinery, the hard work of the lumber industry was done by men known as lumberjacks.

Working out of remote camps, lumberjacks developed a process and division of labor to transform a mighty tree into kindling by hand.

“Fallers” did the actual job of felling a tree with axes and saws. Once felled and delimbed, a tree was either cut into logs by a “bucker,” or skidded or hauled to a railroad or river for transportation. Sometimes chutes with flowing water called log flumes were built to transport logs down mountainous terrain.

In the year of 1850, the redwood forest covered more than two million acres of the coast of California. The northern part of the area was originally occupied by the Native Americans.

This place attracted several lumbermen, and a minor gold rush brought others to the region.

When the gold began to dry up, the men began to harvest the giant trees for the booming development in San Francisco and other locations on the west coast.

After several decades of there being no restrictions on clear-cut logging, serious efforts in conservation started.

It’s estimated that up to 96% of the redwoods were logged. Now, 45% of the redwoods that are left are found in the Redwood Nations and the State Parks. The parks are protecting 38,982 acres of old forest.

The Redwoods have survived along the northern coast of California for around 20 million years and are linked to tree species that lived 160 million years ago. The tallest trees reach heights of around 350 feet (107 meters). The Redwoods are able to get a diameter of 24 feet (7 meters) and can weigh up to 1.6 million pounds.

These enormous trees can live to 2,000 years old and have been on the planet for around 240 million years. Although they were once thriving throughout much of the Northern Hemisphere, today redwoods can be only found located on the coast of central California through to southern Oregon.

They don’t live more than 50 miles inland and are commonly seen in long belts instead of small groves. 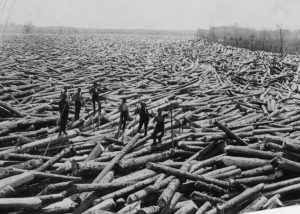 These trees are the largest of living things and stem from ancient times, and are linked with the thought that they were present on earth at the same time the dinosaurs were.

They were once found just about worldwide, their natural range is currently restricted to the foggy coastal region of Northern California.

There is a strip located in the Sierra Nevada mountains, and a small group in a remote valley located in China. These are the only forests left of a tree line that at one time spanned the earth.