A sighting was published by the New York Times on April 4, 1885. There had been the talk of the sea serpent before this sighting, but the incident confirmed to the citizens of San Francisco that there was indeed a serpent in the water.

J.P. Worker of the Bank of California. At approximately 8.30 am on the deck of the ferry boat Garden City, Allen and several other Alameda residents standing.

Situated about halfway between Alameda and the Goat Island — now known as the island of Yerba Buena — according to the Clark brothers (see below)–they looked on as a huge black monster suddenly raised its head and neck from the water to a height of about 10 feet, opened its jaws, displaying a mouth two feet wide filled with rows of sharply pointed teeth, and after taking a curious glance at the passing steamer plunged again into the water, at the same time elevating a sixty-foot tail, with which it thrashed the water for some time, after which it made off in the direction of the Alameda baths, near which some fishing boats were anchored.

Some incredulous persons to whom the story was told say that the ferryboat struck a floating spar, forcing one end downward in the water and elevating the other as the steamer passed over the submerged end and that after the steamer had passed the elevated end fell back in the water with a splash.

We may expect soon to hear of the destruction of the Alameda fishing fleet, or more probably the establishment of a hotel for Summer boarders in the vicinity of the Alameda wharf.

Strangely enough, the same article also reported an entirely separate sighting of an apparently different monster on the same day:

Besides the sea serpent, which gave a powerful impetus to the romancing powers of several reputable gentlemen crossing on a ferryboat, the bay yielded a sea monster of such strange appearance that the oldest tar on the seawall has not yet even given it a name.

Carl Sevening and John Peat were rowing close to the North Heads around 9 am when they came face-to-face with an animal sporting “a fiercely mustached head of shape between that of a seal and a sea lion.” The monster charged the rowboat, diving under it just before reaching it.

The creature lifted the boat into the air but did not capsize it. It dove, appeared again four feet away on the opposite side of the boat and received a blow to the head from Peat, who was armed with an oar.

The beast was knocked out for a moment before receiving another blow “which knocked the beast silly.” The men secured the monster to the boat with a painter and started towing it, whereupon it came to and started towing the boat speedily for a quarter-mile. When it came to the surface to breathe, Sevening hit it again, drawing blood and knocking it out again. 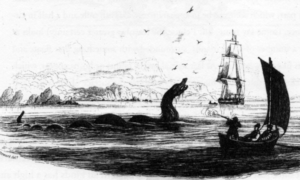 The monster turned belly-up and the men continued towing it to the foot of Larkin-street, where six men struggled to get it on land. Upon inspection, it was found to measure six feet in length and weigh about 300 pounds. It had green eyes and a long, white, bristling mustache. It had two strong flippers, each about one-and-a-half feet long. The article, run the next day, ended by saying “The capture will be kept at the foot of Larkin-street until noon to-day.”

On August 30, 1976, artist and Methodist minister Tom D’Onofrio saw a sea serpent while riding his horse, White Cloud, along Agate Beach in Bolinas. He was taking a break from working on a commissioned piece for members of Jefferson Airplane: a wooden table of a dragon. D’Onofrio rode down to the beach where he chanced upon a friend, Dick Borgstrom. As they talked, Tom saw something out of the corner of his eye.

“Suddenly, 150 feet from shore, gamboling in an incoming wave, was this huge dragon, possibly 60 feet long and 15 feet wide. . . . the serpent seemed to be playing in the waves, thrashing its tail. We were so overpowered by the sight, we were rooted to the spot for about 10 minutes. I literally felt as if I was in the presence of God. 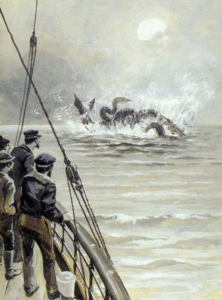 My life has been changed since.” As the creature played in the water, it exposed its underbelly, then disappeared. Having gotten a good look at the creature’s face, D’Onofrio spent the next four days carving it into his table’s dragon head.

During October and November of 1983, multiple people saw a dark, eel-like creature around the San Francisco area–particularly near Stinson Beach and Costa Mesa.

At 2:30 pm on October 31, 1983, a construction crew working on Route 1 just north of the Golden Gate Bridge sighted an enormous creature swimming just under the surface of the water. Mark Ratto and four other construction workers watched the creature for a while from a cliff above Stinson Beach.

Later, they estimated the serpent to be 100 feet long and five feet in diameter. At various points in their observation, the creature swam toward the cliffs, thrashed its head around, or just swam very quickly. Ratto, who watched it through binoculars, reported that it had appeared to be followed by about 100 birds and two dozen sea lions. He saw a small head and neck rise from the water to look around, as well as three coils or body humps.

After this sighting was publicized, people started reporting older sightings. On February 5, 1985, around 7:45 am, twins Robert and William Clark were drinking coffee in their car at the seawall near Stone Tower Point noticed two seals swimming unusually quickly across the bay.

They then saw a large, black, “snake-like” or a tubular animal chasing the seals, moving by forming its body into humps and wiggling up and down. The brothers said the monster seemed to stabilize itself with small, translucent, fan-like fins. The pair saw the creature again several times in the following weeks, and in 2004 reported that they had captured it on film.