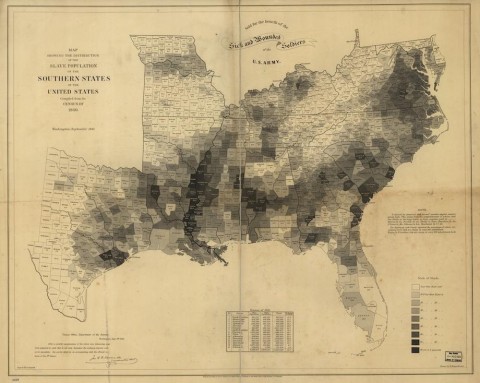 The Map That Helped Convince Lincoln Slavery Had To End

If you look carefully at Francis Bicknell Carpenter’s 1864 painting “First Reading of President Lincoln’s Emancipation Proclamation,” you’ll notice a map in the lower right corner next to the group that Includes Lincoln and his cabinet.

President Lincoln’s slavery map was the U.S. in 1861. Map of the Coast Survey. It drew on census information and used ground-breaking cartographic methods for the period to visually portray the four million Americans held in bondage in the Southern States.

The map revealed which counties had the highest concentrations of slaves, as well as which parts of the Confederacy might be the least committed to the institution.

Lincoln relied on this snapshot map of slavery before the Civil War to decide how to propose abolition. The map pushed him to issue the Emancipation Proclamation, and it drove Union support for ending slavery during the darkest days of the Civil War.

Carpenter lived in the White House for six months while working on his painting, and according to historian Susan Schulten, author of Mapping the Nation: History and Cartography in 19th Century America, the artist encountered Lincoln poring over the map on more than one occasion.

The map is an early example of statistical cartography.

The slave population of each county is represented numerically and through a graded scale of shading.

The higher the number of slaves, the darker the shade. In a 2010 piece in the New York Times “Opinionator” blog, Schulten writes:

The map reaffirmed the belief of many in the Union that secession was driven not by a notion of “state rights,” but by the defense of a labor system.

A table at the lower edge of the map measured each state’s slave population, and contemporaries would have immediately noticed that this corresponded closely to the order of secession.

South Carolina, which led the rebellion, was one of two states which enslaved a majority of its population, a fact starkly represented on the map.

The map helped Lincoln visualize what he was up against. Areas along the Atlantic coast and Mississippi River, for example, are darkly shaded.

The white populace in those areas was fanatically resistant to emancipation. “Conversely,” writes Schulten, “the map illustrated the degree to which entire regions — like eastern Tennessee and western Virginia — were virtually devoid of slavery, and thus potential sources of resistance to secession.

Such a map might have reinforced President Abraham Lincoln’s belief that secession was animated by a minority and could be reversed if Southern Unionists were given sufficient time and support.”