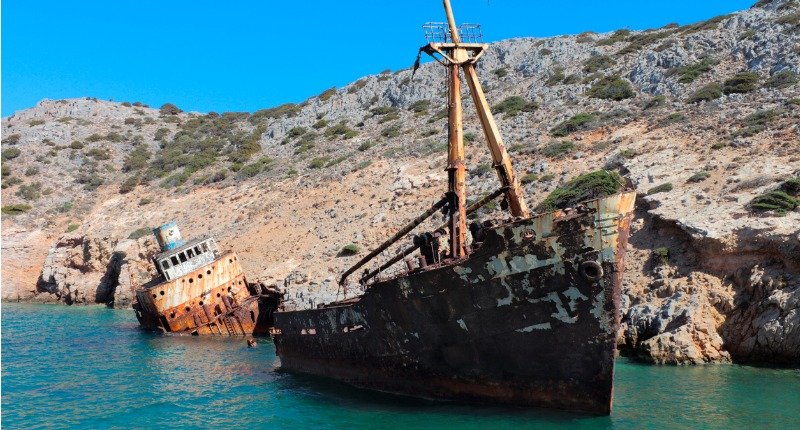 On the Maryland side of the Potomac River, where the current twists and curves east, Mallows Bay is a fairly unassuming shelter. Stand on the bank and study the shallow water closely and your eye will drift across the ships ‘ partially submerged hulls, the eerie rotting wood and steel corpses of the Western hemisphere’s largest shipwreck fleet.

Some 230 vessels have been intentionally sunk in this drab spot only 30 miles down the river for Washington, D.C. They were hastily constructed steamships commissioned by the Emergency Fleet Corporation (later renamed the United States Shipping Board Merchant Fleet Corporation) to meet the demand of keeping supply lines open between the U.S. and Europe during the First World War.

On its formation in 1917 with the U.S. entry into the conflict, the Emergency Fleet Corporation seized control of existing ships. But there still weren’t enough for the incredible strain being put on the wartime supply lines, as more ships were being sunk by marauding U-boats than could be launched.

In the 1st two weeks of America’s involvement, 122 ships were sunk by German submarines. The EFC was tasked with the impossible: building 1,000 steamships over 300-feet long in 18 months.

The EFC was forced to requisition all merchant vessels over a certain tonnage currently under construction in the nation’s shipyards and rush them to completion as timber-only ships in an era of steel plate hulls.

In total half a million workers and 40 shipyards were pressed into service for the war effort, much to the irritation of the companies that owned them and the clients they were building them for — including Great Britain which had its own pressing need for more merchant vessels.

Captured enemy ships were also put to use to keep the Doughboys fed and fueled for the fight against Imperial Germany. They didn’t launch 1,000 ships in the end, only 264 by 1919 and of these just 76 had been put to use before the hostilities ended in November 1918.

In 1925 the fleet was deemed surplus to requirements. Steamships had become obsolete with the move towards diesel engines, and many of the rush jobs were of such poor construction that they couldn’t be used.

Left with so many ships and so little use, the corporation had them burned and scuttled — meaning deliberately sunk — in James River, and then towed to Mallows Bay for salvage.

In total 106 of the existing wrecks are First World War era merchantmen and if you zoom in on Google Earth you can see the skeletal outlines of vessels beneath the green rippled surface of the water.

Among the ships in the bay is the SS Aberdeen which was built in an amazing 17 days for the First World War, and the car ferry SS Accomac which only left service in 1964, but older vessels were dumped there too — including a Revolutionary War longboat and schooners from the 18th century.

The shallow water proved an asset, first during the Great Depression when locals made a living plundering the wrecks for scrap metal, then World War II when the steel needed to be salvaged for the war effort, and then in peace when the partially submerged wrecks were transformed into a habitat for fish and birds, including bald eagles.

Plants grow in sheltered nooks and crannies, and beavers undertake salvage of their own by gnawing at the rotting decks for wood. Now on the National Register of Historic Places, Mallows Bay is undertaking the process to be recognized as a National Marine Sanctuary.

According to LiveScience though, this ghost fleet is on the move. Findings presented to the American Geophysical Union in December 2018 by a group of fifth-grade students from JC Parks Elementary School in Maryland revealed how many of the ships have changed location, by comparing their charted positions over time.

Most of the ships, it turns out, has been moving eastward downriver — some by as many as 20 miles — creepily slowly and surely towards the ocean and an even deeper watery grave.