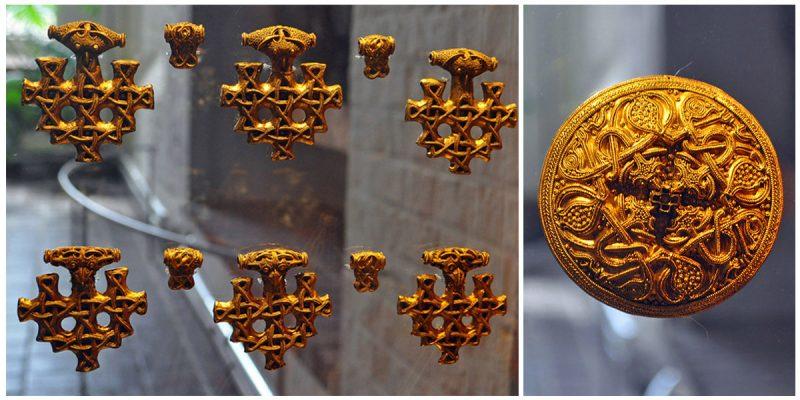 The Hiddensee treasure: The largest discovery of Viking jewellery in Germany

Discovered in 1873,  on the tiny German island of Hiddensee in the Baltic Sea.

The Hiddensee treasure is one of the most stunning archaeological finds and considered the largest discovery of Viking jewelry in Germany.

It is supposed to be manufactured in the second half of the 10th century, the late Viking Age, and it is connected with the nobility of southern Scandinavia.

It is believed to have belonged to the family of the Danish King Harald Gormsson, better known as Harald Bluetooth.

The treasure consists of a brooch (fibula), a neck ring and 14 pendants, all made of pure gold weighing a total of 1,3 pounds.

The largest pendants are made with braided bands; the others show bead knot work and granulations ornaments created by mixing little gold splinters with charcoal in a crucible.

No other Hiddensee-type jewelry has been found before.

All pendants have a shape of a cross and consist of a hollow tube in the shape of a bird’s head, probably an eagle or an owl.

The elongated and twisting shape of these objects is found on numerous decorations from the Viking era.

The combination of the pagan bird motifs and the Christian symbols reflects the increasing influence of Christianity in the 10th/11th century, which makes those pendants interesting in their cultural context.

The original sixteen items are on display at Stralsund Museum of Cultural History, while a replica of the treasure can be seen today in the Hiddensee Local History Museum.