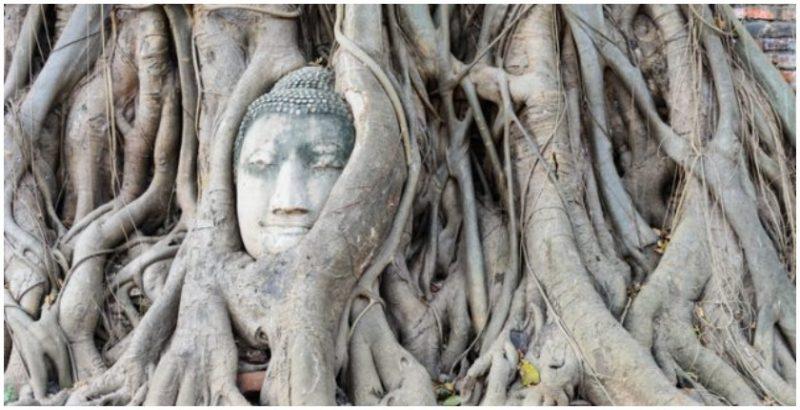 The head of a Buddha hiding inside a tree in Thailand continues to amaze:

Ayutthaya’s ancient ruined city is one of the most famous attractions in Thailand, and every year millions of tourists flock to see the beautiful temples and palaces left behind by the wealthy Siamese kingdom.

However, one of the site’s biggest attractions is not a lavish temple complex or palace, but a single tree in Wat Mahathat’s temple. The reason is simple: take a closer look and you can see the Buddha’s serene face from the aerial roots of this twisted banyan tree.

The head of the Buddha is a major tourist attraction and is believed to be the most photographed object in the whole archeological site. It certainly creates an intriguing image: the Buddha’s head peers emerge from the tangled roots of the ancient tree from the very intestines of the tree itself. Nobody knows for sure how it came to be inside this tree and why it was deposited.

Ayutthaya was established in c.1350 and soon emerged as the 2nd capital of the flourishing kingdom of Siam. According to UNESCO, between the 14th and 18th centuries, this beautiful city was 1 of the most vibrant, cosmopolitan cities in the region, and operated as a center of global trade and commerce.

Ayutthaya’s success was partly down to its strategic location. Perched on an island surrounding three rivers that connect to the sea, it was easily defended from attack yet open to trade and diplomatic envoys. It was also protected from seasonal flooding, unlike many other settlements in the region. It’s no surprise that the city grew in importance and continued to flourish throughout the late medieval and early modern periods.

The wealth flowing into Ayutthaya has been channeled into major construction projects. It is especially well – known for its tall reliquary towers, also known as prang, which has a distinctive conical shape and set upon elaborately sculpted plinths.

Moreover, there were a number of lavish Buddhist monasteries in the city. In Thai culture and history, Buddhism plays a key role, and the ancient Siamese monarchy was a key patron of what became state religion. The city became known as a center for Thai Tantric Theravada, which in Cambodia, Thailand, and Laos was a mainstream form of Buddhism, according to the BBC.

Ayutthaya’s wealth permitted many grand monasteries and temples to be constructed, including Wat Mahathat, otherwise known as Temple of the Great Relic, at some time around the year 1374. This temple was 1 of the most important in the city, located next to the grand palace. It was known as a royal monastery, and the royal family took part in an annual procession to Wat Mahathat every year to make offerings and pray for prosperity.

However, in the Eighteenth century, disaster struck the city. The neighboring Burmese kingdom launched an incursion into Siam in 1767 and sacked Ayutthaya. The invaders razed the city to the ground, and inflicted a devastating blow to the local population, in addition to destroying much of the wealth, artifacts and historical records that were contained in the city.

According to UNESCO, Wat Mahathat’s temple was plundered and set on fire, and the Buddha’s monumental statues that adorned the temple and other buildings in the city were considerably damaged. In this period, and in subsequent years, looters would remove and carry away the heads of these beautiful Buddha statues for sale.

This may give some insight into why the Buddha’s head came to be in Wat Mahathat’s banyan tree. It may be that an enterprising looter took off the head at some point after 1767, only to realize that he couldn’t take it away. He left it in the banyan tree hidden, but never returned to claim his prize. The tree continued to grow around the head over the years, and now it’s nestled.

Whatever the explanation, the Buddha’s head is one of the most intriguing and unusual sights at Ayutthaya, a site already rich in architectural and historical wonders.