The enduring picture of the mysterious heads on the eyes of the people on Easter Island is clearly that-heads.

It is also quite an effect to gaze at the heads from a particular perspective –  and discover that they have full bodies, extending down many, many feet into the ground of the island. 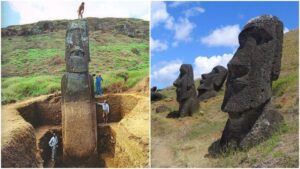 The Easter Island Statue Project has carefully excavated two of the more than 1,000 statues on the islands and tried to reveal the secrets of the mysterious stones and the people who constructed them. 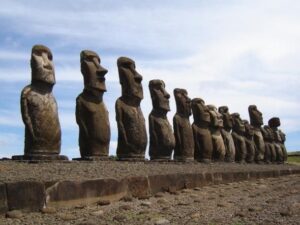 ‘Hundreds, perhaps thousands, of visitors to the island have been astonished to see that, indeed, Easter Island statues have bodies!. ‘More important, however, we discovered a great deal about the Rapa Nui techniques of ancient engineering.’

Among their discoveries, the team have discovered:

The remote island – one of the remotest in the world, tucked away in the South Pacific Ocean – was once home to a Polynesian population, whose history remains mysterious.

They likely sailed to the islands in canoes – a 1,500-mile journey over the open waters, and then, once they landed, they began relentessly carving the stone statues.

This led to their own downfall: By the time Europeans discovered the island in the 1700s, the population had decimated nearly all the trees in the island to help with the statue construction, and the knock-on effect on the island’s ecology led to their decline.

The team also discovered that ceremonies were certainly associated with the statues. On the project website, Van Tilburg said: ‘We found large quantities of red pigment, some of which may have been used to paint the statues.

‘Finally, and perhaps most poignantly, we found in the pavement under one statue a single stone carved with a crescent symbol said to represent a canoe, or vaka.

‘The backs of both statues are covered with petroglyphs, many of which are also vaka. A direct connection between the vaka symbol and the identity of the artist or group owning the statue is strongly suggested.’