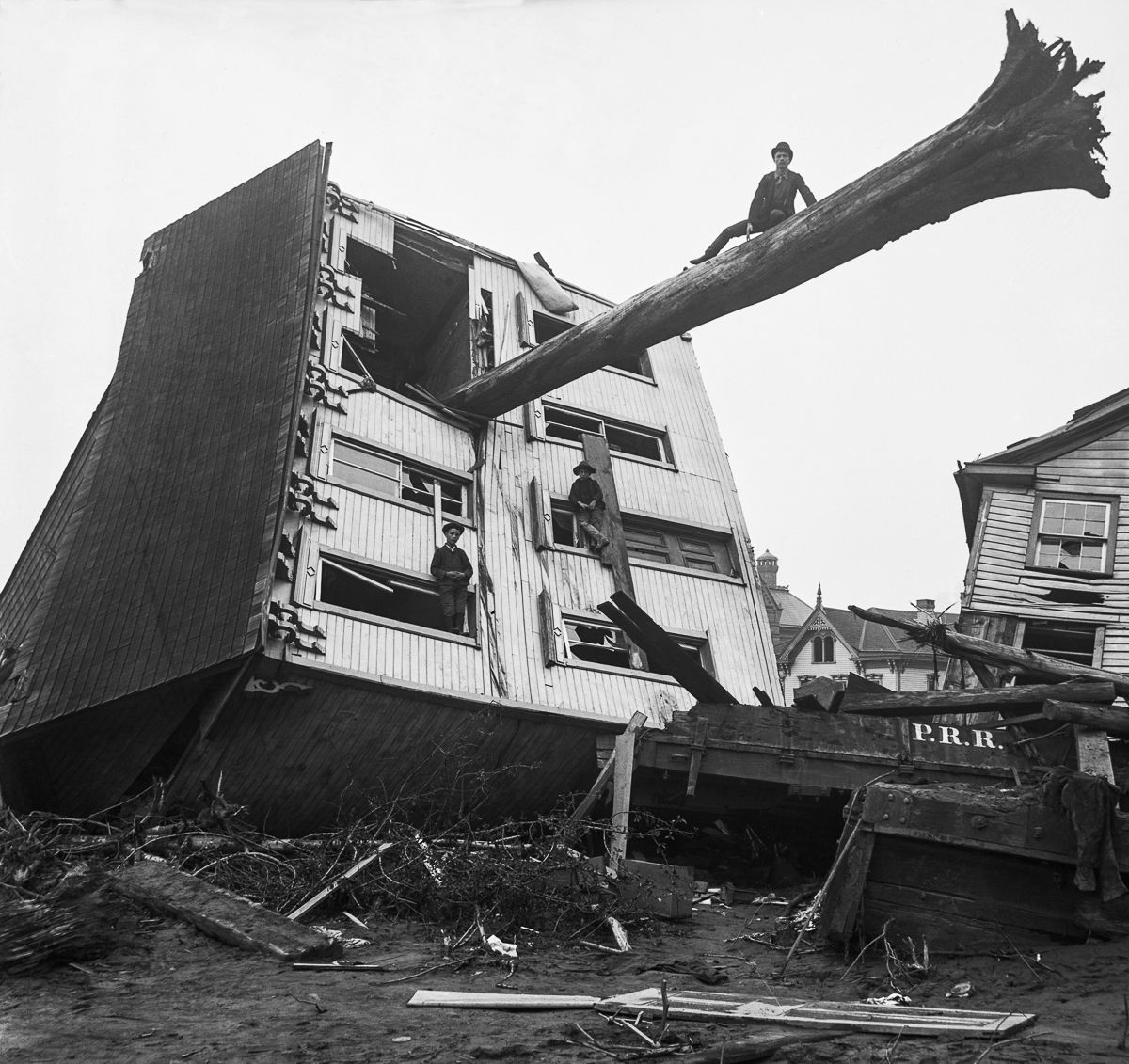 The Devastating 1889 Johnstown Flood Killed Over 2,000 People in Minutes

On May 31, 1889, the world took notice of a small town in Pennsylvania. Johnstown, PA had always been prone to flooding, but nothing could compare to the tumult that unfolded after a nearby decrepit dam gave out.

When the flooding began, the area’s telegraph lines were down, preventing anyone from warning the citizens of Johnstown about the impending disaster. All in all, the flood caused millions of dollars worth of damage and claimed over 2,200 lives.

There’s something primordially terrifying about looking at pictures of floods, perhaps because they remind us of how quickly nature can reduce society to a state of ruin.

Thankfully, this sad story is not without its bright spots. The Red Cross provided substantial aid to the town, and rebuilding efforts began almost immediately. Additionally, newspapers were filled with heroic rescue stories as 12 countries (in addition to the United States) pitched in to help the survivors get back on their feet.

The Flood Began With The Destruction Of A Massive Dam

In 1889, the South Fork Dam was the biggest earth dam in the United States. Composed solely of dirt and stone, it measured a staggering 900×72 feet and contained Lake Conemaugh (which was at the time the country’s largest man-made lake).

The lake was about two miles wide, a mile long, and 60 feet deep. This was a lot for the earth dam to hold, especially since it had been left to atrophy as railroads dethroned canals as the preferred means for moving well. When the dam finally gave out, there was little anyone could do to quell the raging waters.

Citizens Were Caught Off-Guard By The Flooding

Since it had been raining, the citizens of Johnstown were prepared for some flooding, but none of the town’s residents expected the nearby South Fork Dam to break. After an engineer noticed a large chunk of debris lodged in the dam’s spillway, they realized it was going to give.

The engineer rushed back to the town of South Fork to try and send a warning, but unfortunately, the area’s telegraph lines were down, so the message fell on deaf ears.

The torn, bruised and mutilated bodies of the victims are lying in a row on the floor of the planing mill which looks more like the field of Bull Run after that disastrous battle than a workshop.  Bodies were also brought to the local school, and the smell of rotting death was “sickening.”

The ferocity of the storm littered the town with corpses. No part of Johnstown was unscathed, as human remains were found in the library, the church, beneath a signal tower at the railroad, and crammed inside most other alcoves. Though efforts were made to identify the deceased, many of the bodies were mutilated beyond recognition, making it impossible to establish their identities.

Some Survived The Flood Only To Burn To Death

The people of Johnstown’s troubles didn’t end after their homes were ravaged by floodwater; some especially unlucky residents also endured a fire. As survivors of the flood clung to debris to stay afloat, many were pulled to the Pennsylvania Railroad Company’s Stone Bridge, which was rapidly collecting wreckage. Suddenly, the bridge caught fire, roasting many who had managed to endure the initial onslaught of water.

For Johnstown Residents, Flooding Was A Normal Part Of Life

Even before the disaster of May 1889, Johnstown residents were used to frequent flooding. The town was built on a flood plain, so the community was subjected to a serious amount of water every year.

Floods could be caused by a number of things, such as snow that melted too fast or a particularly torrential downpour. Because of this, when the South Gate Dam broke and the town began to flood, residents quickly moved their valuables upstairs and made plans to wait out the storm in the upper floors of homes and buildings. This time, however, the waters were too strong, and buildings provided little protection.

The Flood Produced 14 Miles Of Debris

Perhaps the most astonishing thing about the Johnstown flood of 1889 is the sheer size of the calamity. At the time of the incident, engineers estimated the floodwaters were moving as quickly and powerfully as Niagara Falls. People who were present for the destruction described the waters as 40 feet high and half a mile wide. Allegedly, the sound of rushing water was so loud that it could be heard in other towns.

The flood damaged South Fork, Mineral Point, Woodvale, and East Conemaugh before it reached Johnstown. By the time it arrived, it was carrying roughly 14 miles of debris picked up along the way. Pieces of buildings, barns, and even bodies were found among the wreckage.

The Government Didn’t Try To Protect Johnstown From Future Tragedies

After the situation was contained, the South Fork Fishing and Hunting Club were hit with a series of lawsuits, presumably for neglecting the dam. Tragically, the courts decided the flood was an incomprehensible part of God’s plan, so the club was not held financially responsible for the disaster. Additionally, no laws were put in place to stop the incident from reoccurring.

Americans were fascinated by the tragedy that took place in Johnstown. Over 100 newspapers from across the nation traveled to Pennsylvania to report on the flood. Gertrude Quinn Slattery was only six years old when the incident occurred. As an adult, she reflected on her experience, and recalled being carried along on a “wet muddy mattress and bedding.”

I kept praying, calling, and begging someone to save me. Then I saw a man come to the edge… and [plunge] into the swirling waters… At last, he reached me, drew himself up and over the side of the mattress and lifted me up… Maxwell  McAchren threw me across the water (some say twenty feet, others fifteen. I could never find out, so I leave it to your imagination. It was considered a great feat in the town, I know).

After The Tragedy, The World Stepped Up To Provide Relief

After tragedy struck Johnstown, the world responded with an outpouring of kindness. The city of Cincinnati, OH, sent 20,000 pounds of ham to feed survivors and people aiding the cleanup. Prisoners in Pittsburgh, PA, baked 1,000 loaves of bread per day.

In addition to the aid provided by neighboring states, people around the world contributed to the Johnstown relief efforts. In Paris, Buffalo Bill Cody hosted a benefit to raise money for the flood funds. While 19th-century record-keeping wasn’t totally accurate, it was at the time estimated that some 17 million pounds of food and supplies were delivered to Johnstown. In terms of dollars, the US and 12 other countries collectively raised about $3.7 million in donations.

While The Red Cross was established to aid soldiers and civilians who’d been wounded during the battle, Clara Barton – the organization’s founder – believed they could also help with non-military-related calamities.  Less than a week after the flood-ravaged Johnstown, Barton accompanied five other Red Cross workers to the site of the tragedy. They built housing for displaced residents and distributed over $200,000 worth of supplies.

Barton stayed on in Johnstown until October, as she wanted to make sure citizens had everything they needed to rebuild. As a parting gift, the town gave Barton a locket embossed with diamonds and amethysts.

The Wreckage Was Cleaned Up Remarkably Quickly

With 2,200 dead and an entire town leveled, one might assume it would take years to repair the damages caused by the Johnstown flood. However, the public rallied to provide support, and before a month had passed, serious cleanup was underway. Ten thousand men worked to clean up the Johnstown area, and within 14 days, the Pennsylvania Railroad was back open for business. Cambria Iron Works reopened on June 6, and by the start of July, Johnstown’s shops were up and running.

Some Residents Resorted To Suicide

As the living worked to uncover dead, it became clear that not everyone who died had drowned. Many corpses were riddled with gunshot wounds, indicating that some townspeople had committed suicide. One 1889 newspaper article described the aftermath, and noted the presence of “limp bodies, with matted hair, some with holes in their heads, eyes knocked out and all bespattered with blood were a ghastly spectacle.”

Another article, also from 1889, said, “A number of bodies have been found with a bullet hole in them, showing conclusively that in their maddening fright suicide was resorted to by many.”The horror was not reserved for the town’s residents. According to a log of the deceased, a National Guard member also reportedly committed suicide.