The biggest dinosaur EVER was discovered in Argentina & weighed 77 tons

Last year was a perfect time to be a paleontologist or an archeologist since Argentina discovered the fossilized bones of what is thought to be the largest walking creature on earth.

With a 37-foot neck and weighing in at 77 tonnes, the colossal creature -the equivalent of 7 Tyrannosaurus Rex, Dreadnoughtus schrani was heavier than 14 African elephants, and 7 tonnes heavier than the previous record holder, Argentinosaurus.

Experts believe it is a new species of titanosaur – an enormous herbivore dating from the Late Cretaceous period.

A local farmer in the desert near La Flecha, about 250 km (135 miles) west of Trelew, Patagonia, found the remains of what was once the largest land animal.

It took 5 years and a team of U.S and Argentinian researchers to excavate the remains of the enormous animal.

Researchers made an accurate calculation of the size of dreadnoughts schrani due to finding the complete skeleton to date of a giant dinosaur, with more than 70 % of its bones represented. 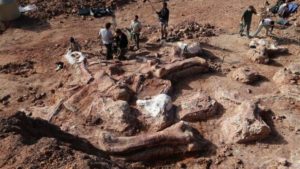 “It weighed as much as a dozen African elephants or more than 7 T-rex.

Shockingly, skeletal evidence shows that when this 65-ton specimen died, it was not yet full grown. It is by far the best example we have of any of the most giant creatures to ever walk the planet,” he added.

Scientists believe Dreadnoughtus schrani lived 77 million years ago in a temperate forest at the southern tip of South America and was so enormous that it would have been unlikely to be threatened by even the likes of the T-rex, according to researchers.

“With a body the size of a house, the weight of a herd of elephants, and a weaponized tail, Dreadnoughtus would have feared nothing,” commented Professor Lacovara. “That evokes to me a class of turn-of-the-last-century battleships called the dreadnoughts, which were huge, thickly clad and virtually impervious.”

When the ground on which it stood turned to quicksand in the wake of a flood, the massive creature died and got buried deep underground.

The rapid and deep burial of the Dreadnoughtus type specimen accounts for its extraordinary completeness. Its misfortune was our luck,” said Professor Lacovara.

But there are a number of similarly sized big sauropod thigh bones out there,” he cautioned.

“Dreadnoughtus gives us our first good look at the anatomy of these gigantic sauropod dinosaurs, which were previously known from rather incomplete material.” He added: “This new information will help to shed new light on the relationships among these giants and the number of times true gigantism evolved.”

Without knowing more about this current find it’s difficult to be sure. One problem with assessing the weight of both Argentinosaurusand this new discovery is that they are both based on very fragmentary specimens – no complete skeleton is known, which means the animal’s proportions and overall shape are conjectural.

“Moreover, several different methods exist for calculating dinosaur weight (some based on overall volume, some on various limb bone measurements) and these don’t always agree with each other, with large measures of uncertainty.

“So it’s interesting to hear another really huge sauropod has been discovered, but ideally, we’d need much more material of these supersized animals to determine just how big they really got.”