The ancient giants of Nevada and the mystery of lovelock cave

It is said that Lovelock Cave, a Nevada cave, is about 150-feet long and 35-feet wide. In fact, back in the spring of 1984, the cave was listed on the National Register of Historic Places and was one of the first caves to be explored and excavated inside the Great Basin.

In 1911, in search of bat guano, two miners were hired to go to Lovelock Cave. One of the main components of gunpowder was guano, which made it extremely sought after.

The miners would continue to remove from the cave a significant amount of guano and other natural components, not knowing the unusual history and artefacts hiding right in front of them. 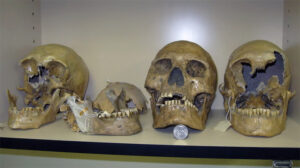 After the two miners completed their work in Lovelock Cave, many weird items began surfacing in the cave.

Sparking the interest of explorers and excavators alike, by the mid 1920’s the cave would be further explored.

During further excavations people would begin to discover baskets, shoes and skeletal remains of whoever once inhabited this cave.

So, what’s so creepy about people once living in caves? The fact that it is speculated that the remains found inside these caves were those of ten foot tall giants.

That’s right! The local legend passed down through members of the Paiute Tribe claim that their tribe was once at war with a community of cannibalistic giants who were nothing short of vicious and unfriendly.

The specific story handed down through generations describes a battle between the two communities.

The Paiute would eventually corner the giants into the Lovelock Cave where they were said to live, demanding that the giants come out of the cave.

After all but a few who were instantly shot with arrows as soon as they exited, the majority of the giants would refuse to exit the cave, trapping themselves inside.

The Paiute lit a fire at the entrance of the cave, pouring deadly smoke down into the cave suffocating and burning alive anyone who was left inside. 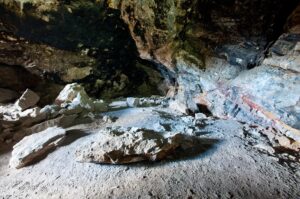 So, where did all of the giant remains go? Local legend continues on to claim that the remains were excavated by those who explored it, only to be hidden away and covered up by museums and the state of Nevada.

Stories of sandals being discovered in the cave that were nearly larger than life are told, disturbing anyone who believes in the local legends.