There’s a rumor going around that a mind-bending fossilized impression occurs up in the Robledo Mountains in southern New Mexico. Why, you ask, should this be of interest? The reason is that it seems to be a print of a human being roaming around 290 million years ago around the area.

For one thing, I support a revised theory of human history, one that is very controversial, it is my publicly stated view that human beings, of one kind or another, go back further than they currently assume, and that Homo sapiens go back several hundred thousand years beyond the present dating consensus.

Despite all this, I confess that it’s a challenge to believe that a guy like myself was roaming around New Mexico long before our world even had dinosaurs!

What is to be made of this story, indeed of the photographic evidence also provided to accompany it?

To make any sense of the matter we need to go back to 1987, it was in that year that a sociologist (and amateur ichnologist) by the name of Jerry Paul MacDonald discovered a plethora of fossilised animal tracks high up in that mountain range. The rock strata, a type of mudstone found at the site, was reliably dated to the Permian Period. This vast sweep of time covers approximately the era between 300 million and 250 million years before present. There is no controversy over the dating of the many fossil prints at the site, they are accepted to be from creatures that must have existed in the Permian period, even if some are from creatures not as yet identified (which seemingly remains the case).

There certainly is some head scratching associated with fossilised prints at the location, a number are seen as ‘problematica’ due to their similarity to those of animals from much later periods, including prints akin to modern birds (small three toed impressions) and even bears (deep five arched toe marks along with nail impressions).

Keep in mind that the Permian is a time long before even dinosaurs, let alone the much more recent appearance of birds and mammals. These prints certainly suggest that there were animals walking the earth during the Permian period of which we know nothing, but is that such a shock when you take into account how little we can ever know of events over 250 million years ago? Perhaps not.

In and of themselves these prints are pretty revolutionary, simply because they suggest life forms that had much more anatomical similarity to modern animals than we would ever have imagined possible at that early point.

That does not necessarily mean a brown bear was chasing a chicken for its dinner, without fossilised skeletons we can only hazard a guess at what these creatures really looked like, to rebuild an entire lost species from a footprint seems at best an outlandish exercise in wishful thinking. With that thought in mind let us now turn our attention back to the supposed ‘human’ footprint.

What does Jerry MacDonald say about the human footprint he supposedly discovered? The answer appears to be, nothing at all. That in itself should throw up some major red flags.

It also seems that the photograph supplied along with the claims of a prehistoric human footprint has no connection to MacDonald or his research work, in fact it is seemingly supplied by a chap named Don Patton. Now Don Patton is a self admitted creationist and young earth theorist, on a number of occasions he has claimed to hold degrees and even Ph.D qualifications in geology and archaeology, these have later been investigated and shown to be academically invalid (related to unaccredited Christian institutions).

In fact, there is actually a second image of the footprint, shown accompanied by Don Patton, and the image is itself an example of ‘problematica’. It looks very much more like a separate slab of stone, or some kind of plaster cast, rather than an in situ print. The foot print also looks very small, smaller than Don’s hand, with no sign of a matching left print despite the fact such a small being’s prints should both comfortably fit on that slab (at least in partial). It should however be noted that there is some responding claims made that this was a very young child and that a partial left print snapped off from the ledge where the initial print was found.

If one digs deeper the entire story starts to fall apart, the print transpires to have been purportedly found by a mysterious hunter (no connection to Jerry MacDonald) and only ever investigated by Don Patton and his associate Carl Baugh (another creationist known to have claimed dodgy academic credentials). They tell us that they were not able to do any real documenting of the find due to the sudden appearance of an angry landowner with a shotgun. What further ads to the fishy smell this story now begins to produce is the fact they state the print was made in a limestone layer, one dated to the Permian period. 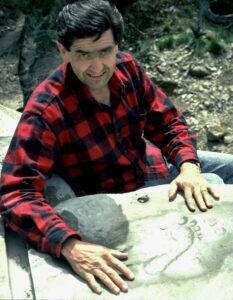 Exactly how this stone layer could have been so accurately dated, by two falsely credentialed amateur geologists, busy running away from an armed man, really begs belief (let alone how they had time to make a cast). The second red flag is the very fact that the layer of the purported print is identified as being limestone, as we have already noted earlier that the layer in which MacDonald found his prints was mudstone, suggesting that this is an entirely different site with no connection at all, if it even exists.

As ever it seems that when we dig for the truth we often have to shovel through a whole heap of disinformation and misinformation. Probably, like me, you are left shaking your head at this entire story and ready to through the whole matter into your mental dustbin. But before we leave this tale let us return to a very intriguing find genuinely made at the location where MacDonald was investigating.

In 1992 Jerry MacDonald took Doug Stewart (a regular contributor to the Smithsonian magazine) up to his site and allowed Doug to participate in making new finds as well as independent examination of existing discoveries. It is actually from Doug Stewart’s later report to the Smithsonian that we hear of the strange bird-like and bear-like footprints. One line in this report does leave us wondering whether some strange vaguely-humanoid type of creature perhaps walked the earth in the distant times of the Permian:

‘He’s got several tracks where creatures appear to be walking on their hind legs, others that look almost simian.’

The reality is of course that without even a photograph of the prints mentioned in the report, we can do little but speculate on what type of creature, some 250 million years ago, left tracks ‘kinda similar’ to those of a monkey. Whatever it was, I am betting it was nothing like we humans.