Researchers investigating the peninsular of Urla-Çeşme in West Turkey discovered a sixth century B.C. Temple dedicated to the goddess of Aphrod.

The team discovered part of a woman statue and a terracotta sculpture of a female head, as well as an inscription stating that “This is the sacred area.”

“From the findings, we understood that there must have been a cult area in the region,” says Koparal.

Aphrodite was the ancient Greek goddess of beauty, love and procreation. At times, she was also associated with seafaring and war.

Early sculptures show her clothed and largely similar to other goddesses, but around the fifth century B.C., artists began portraying her naked or mostly nude, according to Encyclopedia Britannica.

Many temples and shrines were devoted to her cult, with particular areas of strength in Cyprus and on the island of Cythera off the southern coast of Greece.

The ancient city of Aphrodisias, a Unesco World Heritage site located southeast of the Urla-Çeşme site in modern-day Turkey, was named for the goddess.

Followers built a temple to Aphrodite there in the third century B.C., followed by the construction of the rest of the city, including a theater and bath complexes.

As the state-run Anadolu Agency reports, Koparal and her colleagues discovered the first signs of a temple at the site in 2016, when they were documenting the remnants of numerous settlements in the area over many millennia.

“During our screening of the surface, we detected the Aphrodite temple from the sixth century B.C.,” Koparal tells Anadolu. “… It is a fascinating and impressive discovery.”

Since 2006, researchers have discovered a total of 35 prehistoric settlements within the approximately 17,220-square-foot archaeological site. Sixteen of them date back to the late Neolithic period—the last part of the Stone Age. 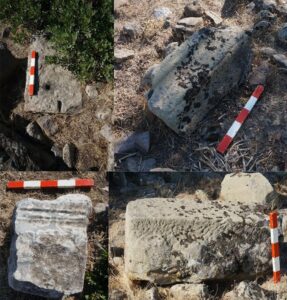 The site is located near the city of İzmir. Formerly known as Smyrna, the metropolis is one of the oldest cities in the Mediterranean region. Izmir has been a significant location for people of the region for at least 5,000 years; pottery remains show that Greek forces settled in the area around 1000 B.C.

Per the Hurriyet, the research documents economic and social relationships among people living in the region since 6000 B.C.

The findings include burial mounds and caves used as sacred sites. Koparal says the team is working with local people to preserve the finds, which may face threats from looters and urban development.

Aphrodite wasn’t the only classical deity worshipped in the region: Last fall, reported Ahmet Pesen for the Anadolu Agency, archaeologists excavating the city of Daskyleion’s acropolis unearthed a 2,400-year-old mask depicting Dionysus, the Greco-Roman god of wine and ecstasy.