The Dolmen of Guadalperal, also known as the Spanish Stonehenge, is a circle of dozens of megalithic stones that are believed to date back to 5000 BC. Now, as an unexpected side-effect of the country’s cruellest drought in decades, the prehistoric stone circle reemerged inside Spain’s Valdecanas reservoir after the water level has dropped to 28% of capacity, according to CNN.

“It’s a surprise, it’s a rare opportunity to be able to access it,” said archaeologist Enrique Cedillo from Madrid’s Complutense University, who rushed to study the structure before it gets submerged again by autumn rains.

With its age of about 7000 years, the Spanish Stonehedge is possibly thousands of years older than its more known counterpart in England.

It was discovered by German archaeologist Hugo Obermaier in 1926, and was flooded in 1963 as part of a rural development project under Francisco Franco’s regime.

Since then, the Dolmen of Guadalperal has only become fully visible four times – most recently in 2019, when it reemerged for the first time after being out of sight for 50 years.

The large circle of about 150 standing stones (or megaliths), some more than 6 feet (1.8 meters) tall, are arranged around a central, open oval-shaped area. The mysterious structure may once have supported a massive stone cap to cover the space used for ritual uses. 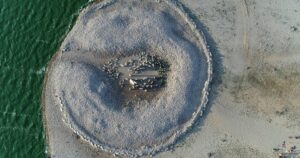 The dolmen was designed as a burial place and a temple to worship the sun. Most likely oriented around the summer solstice, it allowed the sun to shine upon the community’s buried ancestors.

According to Primitiva Bueno Ramirez, a specialist in prehistory at the University of Alcalá, worshippers would have entered through a narrow hallway adorned with engravings and other decorations and then arrive in a more spacious main chamber (about 16 feet across) where the dead were likely kept.

One particularly large stone (a “menhir”) seems to mark the entrance to the structure.

The rocky threshold has two engravings: a human figure on one side, and a squiggly symbol on the other.

The latter could represent a snake or the Tagus River, the longest waterway in the Iberian Peninsula, where the stones were transported from about three miles away.

According to NASA’s Earth Observatory website, if a waterway is indeed being depicted, that could make it one of the oldest maps in Europe. 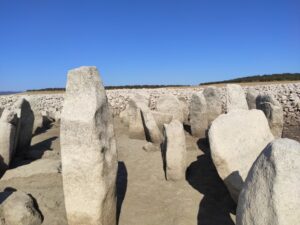 As before, the stones will likely be submerged again with the rain coming. For that reason, local groups have petitioned to move the entire monument to higher terrain, so that the stones could be studied more thoroughly and and made open to the general public. 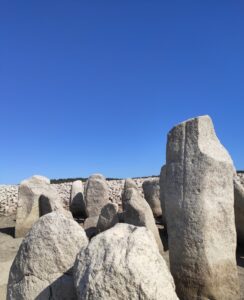 But some archaeologists worry that moving the monument would only accelerate its decay, especially if it’s done hastily, in a race against the rising waters.

So for now, the Dolmen of Guadalperal is waiting to be submerged again.