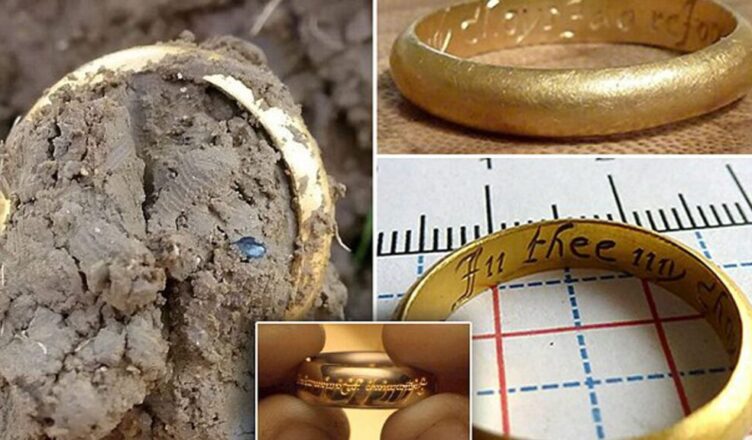 Centuries after it was last seen, a gold ring engraved with a romantic message was unearthed.

Amateur treasure hunter Morley Howard was metal detector when he found his find in a recently ploughed field in Highbridge, Somerset.

The ring is thought to be a 300-year-old posy ring, traditionally given by lovers in the Elizabethan times, with a Lord of the Rings-style inscription reading ‘ In thee my choys I do rejoys. ‘

Mr Howard, from Burnham-on-Sea, is now waiting for the ring to be dated by the British Museum.

He said: ‘When previously metal detecting on this land I’d only unearthed pre-decimal and modern items, but when the farmer recently ploughed the land, I thought I’d give it a couple of hours again.’

‘My metal detector was quiet initially, but just as I was about to turn around, my machine gave a good strong signal and I dug a small plug and lifted the soil to reveal a small band of yellow.

‘It was a marvellous moment – I thought what a loss it must have been for the owner at the time, but it was also a joy for me to get a treasure find.’

He took the ring to the Somerset Heritage Centre before sending it on to the British Museum where it will be verified by jewellery experts.

But Mr Howard believes it is an Elizabethan posy ring, which were traditionally given by lovers with romantic messages engraved on the inside in the 15th, 16th and 17th centuries.

He said: ”Many posy rings were made for women and are smaller, but this one is a male ring and weighs 6.8 grams.  It’s hard to date as there are no maker’s initials or hallmarks.

‘If a museum wants it, they’ll have to pay the land owner 50 per cent and myself 50 per cent once it’s been valued.

‘If the ring is not acquired by a museum, then it’s returned to me and the landowner and we’ll decide what to do with it.’

The inscription is typical for a ring of the period.

Burnham-on-Sea dates back to Roman times, making it a favourite with treasure hunters.  In 1607 the Bristol Channel flooded, swamping Burnham and leaving many treasures buried under the mud the water brought.