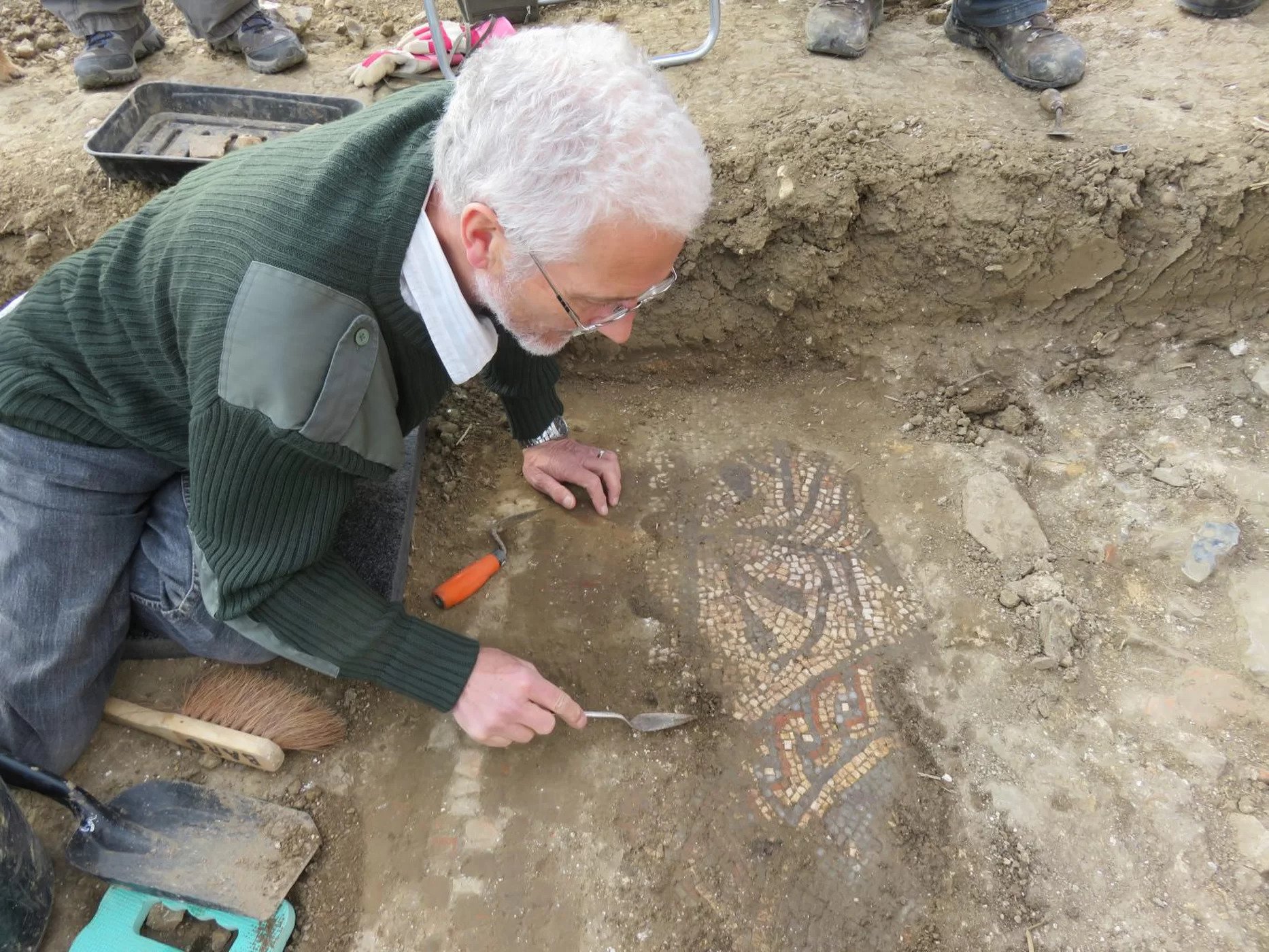 So Rare Roman Mosaic found in Boxford, England by Archaeologist:

A Team of volunteers has discovered a rare Roman mosaic in Boxford, England, that they say is likely more than 1,600 years old.

“Frankly, I thought it was a hoax when I first saw it because it was so unlike anything that ever happened in this country,” said Anthony Beeson, who was involved in the discovery. Beeson is a Roman art and architecture specialist and a member of the board of the Roman Archeology Association.

The partially uncovered floor mosaic, which depicts the Greek mythological hero Bellerophon, is thought to be from sometime between A.D. 360 and 380, according to Beeson.

It is a rare find because it depicts figures — not just geometric designs — and because it has an inscription, Steve Clark, a co-project leader for the Berkshire Archaeology Research Group of the Roman Boxford Project.

The mosaic is also unique because the figures — both those in the central panels and those around the edges — extend beyond their borders.

The corner figures extend outside their circular frames, as does a figure that may represent either a season (likely spring or summer) or Cupid. One of Pegasus’ legs stretches over its border as well.

“You never find that in British mosaics, and you very, very rarely find it in any mosaic,” he added. “It is done by somebody who does not want to stick to the rules, which, I think, is its charm.”

The mosaic was on the floor of a room that was likely used for entertaining guests, Matt Nichol, a project officer for Cotswold Archaeology who was responsible for excavating the mosaic.

The owner of the modest villa in which the mosaic was discovered may have regaled his visitors with the stories depicted on the mosaic: one that shows a king named Iobates receiving Bellerophon into his court, and another of Bellerophon slaying Chimera, a monster that was part lion, part goat and part serpent, according to Beeson.

By killing Chimera, which represented winter, Bellerophon was said to set the seasons rolling. At the edge of the mosaic, Hercules can be seen fighting a centaur, a fight that the famous mythological hero instigated by stealing wine from a group of centaurs.

While large floor mosaics are ordinarily found as part of sprawling palaces, such as Fishbourne Roman Palace and Gardens in West Sussex, England, the villa holding the newly found mosaic was relatively small, only about 100 feet (30 meters) in length, Nichol said.

“This man with his little villa in the British countryside wanted to be seen and recognized as a member of this empire-wide elite, what it meant to be an educated Roman,” Katherine Dunbabin, a professor emerita of classics at McMaster University in Ontario who was not involved in the discovery, told Live Science.

According to a statement from Cotswold Archaeology, Roman pottery, tiles and animal bones were also found on the site.

The researchers reburied the mosaic in order to protect it while waiting for funding to uncover the rest.