Bedlam broke out this morning in Dublin city centre, as the new Luas Cross City was coming to terms with the commuters.

People were faced with delays of up to 40 minutes from O’Connell Bridge to Trinity College, as buses, trams, cars and cyclists were trapped in the gridlock along the road.

And several have taken to social media to state that they’re late to work because of chaos. 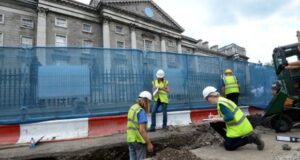 A number of signal problems and traffic light issues along the line are believed to have been blamed, with Gardai ultimately called to try to help ease the flow of traffic.

One commuter wrote online: “Forty-two minutes for my bus to get down O’Connell St and past College Green?!?! Thanks for a terrible commute.” While another said: “Took me 35 minutes to get from O’Connell Bridge to College Green on the bus. Damn you Luas Cross City.”

And on the gridlock, one added: “Four northbound Luas Cross City trams on O’Connell St including at least one blocking a pedestrian crossing.”

People using other forms of public transport in the city centre also hit out at the fact they too had been caught up in the congestion.

One wrote: “Didn’t even use the new Luas this morning and it still managed to add 30 mins to my commute. Causing absolute chaos for traffic around College Green.”

Luas Cross City drivers said the training given to them was “insufficient”.

Sharing pictures of the tailbacks, a passenger said: “First experience of Luas Cross City. Buses block trams, trams block other busses. Tram traffic jams to get over O’C Bridge. Give up and walk to work. Arrive late.”

They stated: “Green Line running with delays this morning, apologies for any inconvenience caused.”

The firm said: “We wish to advise customers of heavy volumes of traffic
in and around the city centre. We are experiencing severe delays on our services across the city.”

A Transdev spokeswoman told the Irish Mirror: “This morning Monday, between the hours of 8am and 9am there was a traffic signalling issue in Dublin City at Trinity College.

“Dublin City Council, Luas and the Garda traffic division all worked to deal with the signalling failure and the resulting traffic disruption.

“Luas is working with Dublin City Council, Dublin Bus and other parties to ensure this signalling issue is fully resolved.”