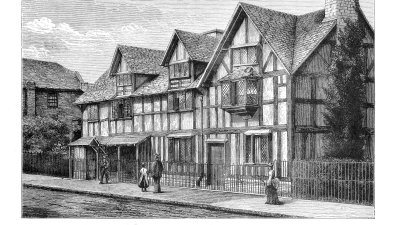 An investigator claims he found out where William Shakespeare was living in London and wrote some of his most famous works, including Romeo and Juliet and the Dream of A Midsummer Night.

A theater historian recently announced that he had recognized the house where Romeo and Juliet and several other plays were written by William Shakespeare. It stood in east London’s prosperous region.

Geoffrey Marsh, director of the Theater and Performance Department of the Victoria and Albert Museum, “spent a decade investigating meticulously the home of the English dramatist and poet by cross-referencing official records to identify exactly where Shakespeare lived in the 1590s.”

It has been widely accepted that Shakespeare lived close to what is now Liverpool Street station between 1597 and 1598.

Marsh told the media that he had narrowed it down: the Bard lived at what is now known as 35 Great St. Helen’s, which is occupied by an office block.

Marsh told The Telegraph that he believes Shakespeare drew details for the characters in many of his plays from what he saw around him in this Elizabethan neighborhood.

“He was living in one of the wealthiest parishes in the city, alongside powerful public figures, wealthy international merchants, society doctors, and expert musicians.

The merchants had connections across Europe and doctors were linked to the latest progressive thinking in universities in Italy and Germany. Mixing with these kinds of people had a profound effect on him,” he added.

Marsh told the press that his theory is Shakespeare lived next door to two doctors, Edward Jorden, and Peter Turner, who are believed to have also lived in Germany and Italy. “Although it cannot be proven they certainly met and conversed, Mr. Marsh thinks it is highly likely they would have met at church on Sundays,”.

Historians’ confirmed biographical information on Shakespeare has gaps. They believe he was baptized in Stratford-upon-Avon, 100 miles northwest of London, on April 26, 1564, but do not know his birthday.

He grew up and had a family in Stratford, but he worked in London, the pulsing center of English theater. While in Stratford, it’s assumed that Shakespeare attended grammar school. Its curriculum consisted of an intense emphasis on the Latin classics, including memorization, writing, and acting classic Latin plays.

He was an actor, a playwright, and a partner in a leading acting company in London. One of the arguments against Shakespeare being the true author of some of the plays attributed to him is that skeptics say he did not know enough of the world beyond England.

“Living in what was one of the power locales of London would have also enhanced Shakespeare’s status as he developed his career, sought a family coat of arms, and planned to buy an impressive and expensive house in Stratford,” Marsh told the BBC.

According to Marsh, Shakespeare had lived in a property overlooking the churchyard of St. Helens as a tenant of the Company of Leathersellers, a guild that organized the Elizabethan leather trade.

“While erratic spelling made it a challenge to decipher and interpret the documents, Marsh was able to analyze records that were ‘remarkably’ preserved, stretching back to the 1550s,” according to the BBC.

Among the plays, Shakespeare most likely wrote when he lived in this house were not only Romeo and Juliet but also A Midsummer Night’s Dream, The Merchant of Venice, and Richard II.

The names of the warring families, the Montagues and the Capulets, were two real clans who lived in Verona. Similar names to Romeo and Juliet appeared in the poems and plays of others in the 16th century.

“The Tragical History of Romeus and Juliet,” a poem, was written in 1562. William Painter crafted “The Goodly History of the True and Constant Love of Rhomeo and Julietta” years before William Shakespeare took on the story of the doomed lovers.