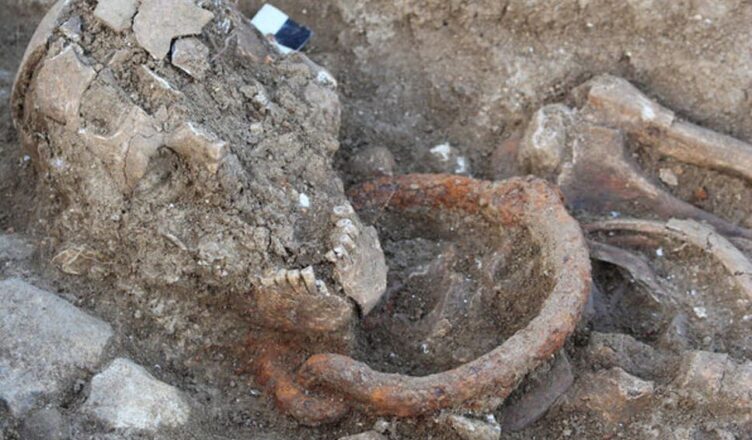 Hundreds of Roman graves have been found by archaeologists, some of which contain skeletons still bound by shackles on their necks and ankles.

A building site about 250 m west of the amphitheater of Saintes once used for fighting between gladiators and the wild animals is an incredible excavation.

Among the hundreds of graves found, five skeletons – four adults and one child – were found shackled or chained.

Dating back to the first and second centuries AD, the gravesite is thought to have been an important necropolis used for those massacred at the nearby stadium.

Construction on the Saintes amphitheater began during the reign of Emperor Tiberius (A.D. 14-37) and was completed under Claudius (A.D. 41-54). In its finished state, the arena could hold around 18,000 people. Today, it is the largest remaining amphitheater in France, as well as the oldest.

Archaeologists began digging at the site of the necropolis—located 250 meters west of the Saintes amphitheater—last year. It was typical for Roman necropolises, used for burials and cremations, to be located in the countryside, outside major towns and cities.

The Saintes burial ground contains hundreds of graves, which archaeologists have dated to the first and second centuries A.D. Experts believe the necropolis may have been used for those who died at the nearby stadium, during the gladiatorial combats that were common during Roman times.

Among the hundreds of sets of human remains at Saintes, the scientists uncovered a particularly unsettling find: five skeletons wearing riveted iron shackles of various types, suggesting that the deceased might have been slaves.

Even more disturbingly, one of the skeletons belonged to a child. Three of the adults had their ankles bound by iron chains, while the fourth was shackled at the neck and the child had a chain attached to his or her wrist.

Archaeologists previously discovered shackled skeletons in the 2005 excavation of a cemetery in York, England, which also dated back to the days of the Roman occupation.

Researchers at the time proposed that the remains belonged to slaves, who were often forced to fight each other to the death in Roman gladiatorial contests. (Some of these gruesome battles pitted an armed man or woman against another combatant who was unarmed.)

In the case of the York cemetery, some of the shackled bodies were found with bite marks, suggesting wild animals might have killed the victims in the gladiatorial arena.

The archaeologists now hope to determine a cause of death for the individuals found buried in the Saintes necropolis, as well as their status during their lifetime, and whether all those buried there were members of the same community.

Many of the skeletons were buried in pairs, laid out side by side with their heads and toes touching in rectangular pits that resembled trenches.

While some ancient Romans were buried with their possessions, the graves at Saintes contain almost no artifacts, except for several vases recovered beside the body of one man.

One skeleton—belonging to a child—was found with coins placed over the eyes, a common practice in Roman times.

Romans believed a river separated the world of the living from that of the death, and that the coins enabled the dead person’s spirit to pay the ferryman for safe passage across that river to the afterlife.