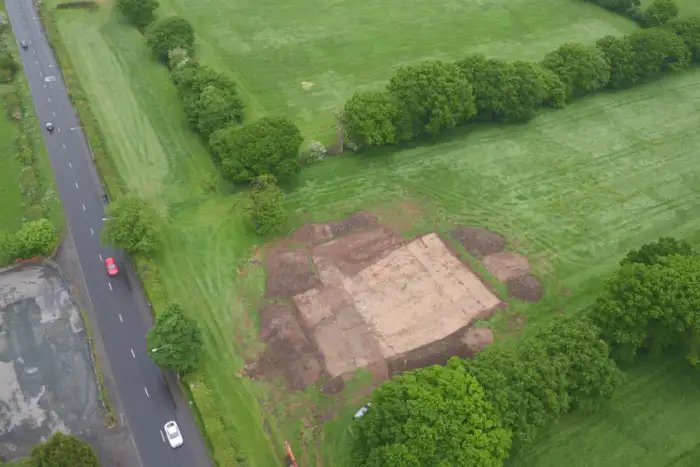 Archaeologists from Salford University were called in to carry out a dig at the Cuerden site to the south of the M 65 and west of the A 49 Wigan Road in Lostock Hall, as part of planning permission for a major mixed use development over 65 hectares.

What they discovered has answered a 170 year-old question over the route of a Roman road, and the found of rare pottery has shone new light on the trading history of the area and how people lived.

The “pristine” section of Roman road from Wigan to Walton le-Dale was unearthed a metre under the surface in the western part of the excavation site, contrary to long held expectations by experts and comprised of a gravel surface and a north/south aligned ditch.

The surface of rounded cobbles and gravel, thought to be from the River Lostock, has survived to a maxiumum extent of 18.32 meter by 11.4 meter – a very wide road showing it was the main highway for the Roman military moving north.

Dr David Hunt, curator of the South Ribble Museum in Leyland, said: “Make no mistake, this is a very, very extraordinary and spectacular found.

“It is possibly the most significant Roman archaeological discovery in the last 50 years in Lancashire. “People have been trying to find the line of that road since the 1850’s.

There have been all sorts of ideas about it, with most people, myself included – believing it was under the A 49. “It really leads us to question what route the Roman road took through Leyland.” Archaeologist Ian Miller of the University of Salford, described the find as “very exciting”.

He said: “I have lost count  of the number of times we have dug trenches looking for that road and never  found it.” He added: “The bit we found was pristine. It is quite a unique survival and we managed to hit the one site that had not been ploughed over during 2000 years of agriculture.

It was really, really well preserved.” Other discoveries said to be of regional significance include a stone age worked flint blade, medieval and early post medieval pottery, and remnants of Pinfold House, a former medieval/post medieval farmstead, which included an ornate bone knife handle, lead weights and a lead spindle whorl.

A rare instance of both Reduced Greenware pottery occurring on the same sire as the Midlands Purple wares was also discovered- something “virtually unheard of” in the North West area.

Previous studies indicated that the River Ribble may have formed a physical boundary for the distribution of these types of pottery, but these found may provide “crucial” new proofs of trade and use of both occurring north and south of the river.

In total, 750 shards of pottery were recovered from the site, weighing 20kg. Checks showed 49.1% of the shards date from the medieval period, with the remaining pottery dating to the post-medieval and modern period. Mr Miller added: “In the North West we dont really understand how the pottery industry was distributed from the 12th-century onwards, so this is a very rare find.

“What is really, really nice is that on this site we have a continuous sequence – you have pottery from the 12th-century right through to the 18th and 19th-centuries, and that is unusual. “It’s an opportunity to look at how people lived and how ceramic conditions moved on.”

Coins, including a George III penny ‘1799’ and a George V penny ‘1917’ were also discovered during the dig as well as ancient human excrement at the bottom of a well, which is being sent off to Durham Univeristy for analysis to show what diet people lived on.

Mr Miller added: “It could be amazing environmental evidence.” Archaeologist’s have recommended that a permanent information board should be installed on the site to celebrate its heritage.

Lancashire County Council, which made the application for development on the site alongside Maple Grove Developments, said the finds were “interesting and regionally significant”, but that the discoveries would not hold up any building work on the site.

Stephen Young, executive director of growth, environment, transport and community services at Lancashire County Council, said: “While they are not significant enough to merit preservation in situ, we are pleased that this archaeological work will help to further the understanding of historical activity and life in this area.

“It is unlikely that these finds would have been uncovered without the extensive site analysis required as part of the development work on the site.

“This work will not affect our development plans for this site, which aim to bring jobs and economic growth to the area.” Artefact’s will be presented to South Ribble Museum in Leyland and will go display once data work is completed over the next year. No further field works are required on the site.