If you’ve ever driven in Los Angeles, you know what a herculean task just navigating the streets can be. Congested at all hours of the day, as well as pedestrians running randomly across the street, most drivers deserve medals just for surviving their daily commute.

Unbeknownst to these warriors of the highway, there is a safer and less-used passage just under their feet.

There are currently 11 miles of underground tunnels running beneath downtown Los Angeles, with several miles still yet to be rediscovered. And the history of these lost tunnels includes everything from bootleggers to underground lizard people!

The most well-known tunnel runs between the Los Angeles County Hall of Records and the Kenneth Hahn Hall of Administration. Some fans may have seen it on season 2 of True Detective which utilized it for a subterranean shootout scene.

A nondescript elevator located behind the Hall of Records provides the easiest access. Before entering be sure to read the tunnel’s rules and hours, posted just outside the elevator. 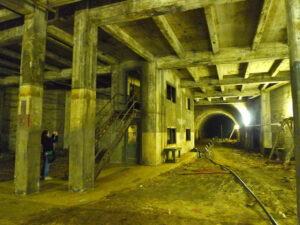 Once down below, an enclosed highway is revealed, with passageways wide enough to drive a utility car through.

Although barely traversed these days, these tunnels were once a superhighway for illegal hooch, criminals, and, at one time, over billion dollars in cash.

During prohibition, the tunnels were used to transport liquor to thirsty customers in speakeasies all across the city. One tunnel still runs to a Skid Row bar called the King Eddy Saloon, located a block from the infamous Cecil Hotel.

In the 1960’s LA County’s administrative offices moved from the Hall of Records to the Hall of Administration. Unfortunately, the move occurred right after everyone in the county had just paid their taxes for the year.

For the next three months from midnight to 7 am, and under the watchful eye of machine-gun-toting police officers, the county began transporting a billion dollars worth of tax revenue to their new offices.

One of the tunnels, now closed to the public, was used to transport high profile criminals from their jail cells to the Hall of Justice. Notorious mobster Mickey Cohen was transported through the tunnels to face charges of tax evasion in 1951.

For the more daring urban spelunker, there are the unused underground tunnels from Los Angeles original subway. The Los Angeles Pacific Electric Railways ran all over Los Angeles including the San Fernando Valley. 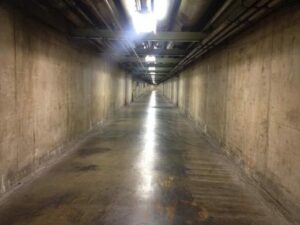 The tunnels, now condemned and closed to the public, housed LA’s first underground transit system. Now they are an unlit labyrinth of abandoned concrete passageways filled with graffiti, crumbling walls, and other unknown dangers.

LA’s strangest and oldest tunnel is almost 6,000 years old and has yet to be re-discovered.

In 1934, mining engineer G. Warren Shufelt began digging in the middle of the city for what he believed to be a lost underground city of lizard people (seriously!).

By the time the papers had picked up the story, Warren had already dug a 250-foot shaft in search of an underground labyrinth of tunnels that would lead to a “key room” that housed the underground city’s records which he believed to be written on tablets made of gold.

Warren learned about the existence of the lizard people from an old Hopi Indian from Arizona who told him about other tunnels starting at the Pacific Ocean and underneath what is now Los Angeles that the lizard race called home.

Warren’s operation promptly ended when his dig filled with water. To date, no one has resumed the search for the gold tablets or the lizard people. 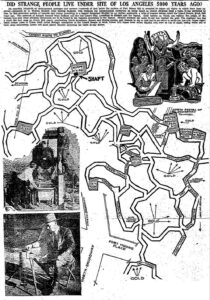