Before the popular Globe Theatre was established in 1599, William Shakespeare’s dramatic productions were produced at the Curtain Theatre in East London .

Archaeologists spent three months excavating the playhouse’s ruins and discovered how peculiar the layout was. 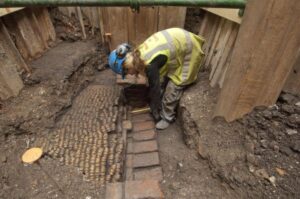 They found a hidden passage underneath the stage, which is believed to have been used by actors to travel about without being seen by the audience.

The Curtain Theatre opened in 1577, and continued staging plays until 1624, at which point plays were moved to the Globe Theatre.

The exact location of the theatre was unknown until 2012, when researchers from the Museum of London Archaeology (MOLA) discovered the remains in Shoreditch.

Now, after three months of excavations, the archaeologists have revealed the original layout of the famous theatre. 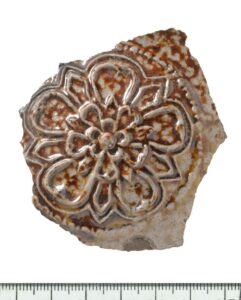 Speaking to IBTimes UK, Heather Knight, who worked on the excavation, said: ‘We found two thresholds of doorways – we thought they were doors to allow the audience access from the yard up to the gallery but now we can see that the doors would actually allow movement underneath the stage, to allow actors to pass from one side of the stage to the other without being seen.’

The stage itself was found to be much longer than originally thought, measuring 14 metres long, and five metres wide.

Ms Knight said: ‘This is the first playhouse we’ve looked at archaeologically where we haven’t got that typical thrust stage – like at the modern Globe, where the stage has three sides to it.’

The stage had an open front, which made the researchers question how actors moved on and around it.

The researchers discovered a hidden passageway below the stage which would have allowed actors to move around.

In a blog on its website, MOLA said: ‘The discovery of an oblong stage which is far longer than expected and the mysterious passageway offers a tantalising glimpse into the secrets that are still to be uncovered.’

The backstage area was found to be very different from other Elizabethan playhouses.

Unlike the Globe, there was no separate area where the actors could have changed costume.

The findings have led the researchers to believe that the theatre was a purpose-built space for public entertainment.

MOLA said: ‘Discovering that the theatre was purpose-built tells us this was not a re-purposed space with a stage added, it was a place where people came to be immersed in entertainment.

‘It had timber galleries with mid and upper areas for those who could afford to spend a little more, and a courtyard made from compacted gravel for those with less to spend.’

Several objects were also found on the site, including fragments of ceramic money boxes, that would have held the ticket money, and glass beads and pins from costumes.

Various drinking vessels and pipes were also found throughout the theatre.

Ms Knight said: ‘We’ve got them all over – some from underneath the stage, some from the yard – it’s quite difficult to say for some whether they were in a public space or an area inside for the actors.’

A display of the finds will sit alongside the theatre remains as part of a cultural and visitor centre at the heart of the completed development, which will also feature 33,000 sq ft of retail, over 200,000 sq ft of office space, more than 400 homes, and over an acre of vibrant public space including a performance area and a park.