San Francisco 1864 – Mark Twain’s Amusing Ride to the Cliff House…. these are his own words 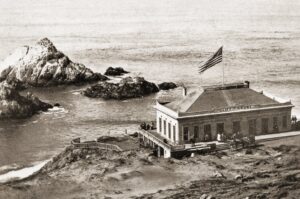 In 1864, Mark Twain worked as a reporter at the San Francisco Daily Morning Call. This job meant that he traveled around the city in all the weather conditions his climate can offer.

Here, we see two different stories he wrote about a trip to the Cliff House, one celebratory one for his day job, and a savage takedown for a literary weekly called The Golden Era. The man was flexible.

“If one tire of the drudgeries and scenes of the city, and would breathe the fresh air of the sea, let him take the cars and omnibuses, or, better still, a buggy and pleasant steed, and, ere the sea breeze sets in, glide out to the Cliff House. We tried it a day or two since.

Out along the railroad track, by the pleasant homes of our citizens, where architecture begins to put off its swaddling clothes, and assume form and style, grace and beauty, by the neat gardens with their green shrubbery and laughing flowers, out where were once sandhills and sand-valleys, now streets and homesteads. 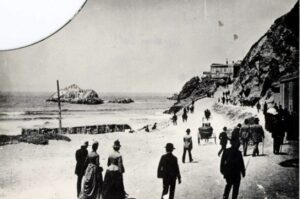 If you would doubly enjoy pure air, first-pass along by Mission Street Bridge, the Golgotha of Butcherville, and wind along through the alleys where stand the whiskey mills and grunt the piggeries of “Uncle Jim.”

Breathe and inhale deeply ere you reach this castle of Udolpho, and then hold your breath as long as possible, for Arabia is a long way thence, and the balm of a thousand flowers is not for sale in that locality.

Then away you go over paved or planked, or Macadamized roads, out to the cities of the dead, pass between Lone Mountain and Calvary and make a straight due west course for the ocean. Along the way are many things to please and entertain, especially if an intelligent chaperon accompanies you.

Your eye will travel over in every direction the vast territory which Swain, Weaver & Co. desire to fence in, the little homesteads, by the way, Dr. Rowell’s arena castle, and Zeke Wilson’s Bleak House in the sand. Splendid road, ocean air that swells the lungs and strengthens the limbs.

Then there’s the Cliff House, perched on the very brink of the ocean, like a castle by the Rhine, with countless sea-lions rolling their unwieldy bulks on the rocks within rifle-shot, or plunging into and sculling about in the foaming waters.

Steamers and sailing craft are passing, wildfowl scream, and sea-lions growl and bark, the waves roll into breakers, foam and spray, for five miles along the beach, beautiful and grand, and one feels as if at sea with no rolling motion nor sea-sickness, and the appetite is whetted by the drive and the breeze, the ocean’s presence wins you into a happy frame, and you can eat one of the best dinners with the hungry relish of an ostrich. Go to the Cliff House.

Go ere the winds get too fresh, and if you like, you may come back by Mountain Lake and the Presidio, overlook the Fort, and bow to the Stars and Stripes as you pass.”

“I have always heard that the only time in the day that a trip to the Cliff House could be thoroughly enjoyed, was early in the morning…

A road unencumbered by carriages, and free from wind and dust; a bracing atmosphere; the gorgeous spectacle of the sun in the dawn of his glory; the fresh perfume of flowers still damp with dew; a solitary drive on the beach while its smoothness was yet unmarred by wheel or hoof, and a vision of white sails glinting in the morning light far out at sea.

These were the considerations, and they seemed worth a sacrifice of seven or eight hours’ sleep…

No, the road was not encumbered by carriages – we had it all to ourselves. I suppose the reason was, that most people do not like to enjoy themselves too much, and therefore they do not go out to the Cliff House in the cold and the fog, and the dread silence and solitude of four o’clock in the morning. They are right.

The impressive solemnity of such a pleasure trip is only equalled by an excursion to Lone Mountain in a hearse. Whatever of advantage there may be in having that Cliff House road all to yourself, we had – but to my mind, a greater advantage would lie in dividing it up in small sections among the entire community; because, in consequence of the repairs in progress on it just now, it is as rough as a corduroy bridge – (in a good many places,) and consequently the less you have of it, the happier you are likely to be, and the less shaken up and disarranged on the inside.

From the moment we left the stable, almost, the fog was so thick that we could scarcely see fifty yards behind or before or overhead; and for a while, as we approached the Cliff House, we could not see the horse at all, and were obliged to steer by his ears, which stood up dimly out of the dense white mist that enveloped him. But for those friendly beacons, we must have been cast away and lost…

We could scarcely see the sportive seals out on the rocks, writhing and squirming like exaggerated maggots, and there was nothing soothing in their discordant barking, to a spirit so depressed as mine was.”