One of the discoveries of archeological work in Waterbeach Barracks was Roman pottery and coins, together with the Bronze Age PalStave ax-head. Prior to the start of work on the first phase of the new development of the city, Oxford Archeology East worked with the developer Urban & Civic and Cambridgeshire County Council on the site ‘s historic environment team.

Comprehensive research was undertaken and three areas of Roman settlement, two areas of Roman industry and several parts of a medieval field system – called a ridge and a furrow – were uncovered

The land is at the junction of two important Roman regional transport links: the Car Dyke (Old Tillage) Roman canal which is one of the greatest engineering feats carried out by Romans in Britain – and the Roman road known as Akeman Street, which connects Ermine Street near Wimpole Hall and runs along the alignment of Mere Way joining the broad route of the A10 up to the north Norfolk coast.

The archaeology team has been investigating the site since 2016, and following desk-based research and geographical surveys of the key areas, they have opened nearly 140 archaeological trial trenches across the entire site to explore what has survived the more recent agricultural and military uses.

Over the last few weeks, approximately seven hectares – the size of 10 football pitches – have been dug in the northern corner of the airfield, with early evaluation identifying a potential Roman settlement. 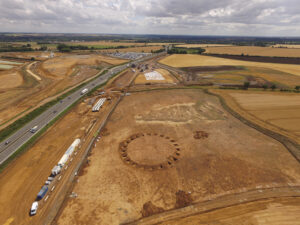 Having stripped the topsoil with excavators, the team was able to delve deeper with hand tools to explore and interpret the layers of history beneath. This included a complex system of ditches, dating to the latest Iron Age and early Roman period (about 2,000 years old) as well as a lot of artifacts: from Roman pottery and coins to an amazing Bronze Age palstave axe-head. 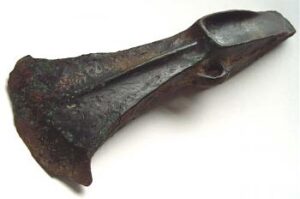 A number of pottery kilns were also found that would have produced pottery during the Roman period.

Stephen Macaulay, deputy regional manager of Oxford Archaeology East, said: “Waterbeach Barracks is a fascinating site and the new development gives us a unique opportunity to capture the essence of its foundations and an understanding of how our ancestors lived and worked the land.

“The site is in a unique location and the historic role of Car Dyke and Akeman Street Roman road (the modern A10) and water connections need more celebration within Cambridgeshire. Hopefully, the approach at Waterbeach is the start of making that happen.”

Further archaeological excavations will take place in advance of each phase of development at Waterbeach. The first phase covers 1,600 homes, while 6,500 will be built in total on the site by Urban & Civic.

Rebecca Britton, of Urban & Civic, said: “Waterbeach Barracks is a historic place with rich layers of heritage that span millennia.

While the recent military past is something that we are all familiar with, this work enables us to dig deeper into the past, find out more about how our predecessors lived and what they did here.

“This is not only incredibly useful in informing our understanding of the past, but also provides a rich seam of inspiration for the future development: whether it’s street or park names, the design of public art, or part of connecting future residents with the history literally under their feet.

“History is a great way of establishing connections between people and is part of our wider commitment to working with Denny Abbey, the Tithe Barn at Landbeach, Wicken Fen, and other important local heritage assets to engage people with and celebrate the amazing history.”