The military bottle dates back to the second half of the 19th century, it was invented by the Romans.

One of these has just been found, in extraordinary conservation conditions, in the town of Seynod, in south-eastern France. 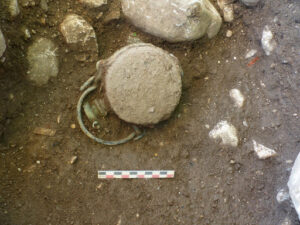 The architects of the discovery were the archaeologists of the National Institute for Preventive Archaeological Research (Inrap).

A shopping center, or something similar, should be built on the site, but since the first investigations, evidence of a sacred Roman site with two or three small temples emerged, of which only the stone foundations remain.

In two of these, the cell floor (the closed space of the temple) and the vestibule can be clearly identified and referred to in the first half of the 4th century.

However, the site had to be older: the discovery of pottery from the end of the 1st century. they date the first construction of the sanctuary to that time.

In addition to the temples, 42 tombs with very different dimensions have emerged: the largest is more than two meters wide, the smallest only a meter and a half. Inside some of these coins, ceramics and figurines have been found. Among the various votive objects, a metal “laguncula” of the 4th century has sprung up. AD that belonged almost certainly to a legionnaire.

This is an exceptional find for the state of conservation – explains the archaeologist Carlo Di Clemente – there are only very few other specimens found from excavations.

The “laguncula” was the container flask, usually made of copper, bronze or other alloys, which each legionnaire brought with him to preserve his daily ration of cereals, which he would then consume together with the companions of his “contubernium”, the smallest unit of the Roman army (8 soldiers). The food supply of the Roman army was extremely efficient: a legion (about 5000 men) needed around 1.2 tons of cereals per day.

The container, with a very graceful shape, is composed of two iron disks joined by bronze plates with a lobed outline like that of an oak leaf. Both the hinged handle and the cap are made of bronze, once connected to the flask by a metal cable, also in copper alloy, of which a fragment remains. Both the cap and the base are decorated with concentric circles.

The interior was coated with wax or pitch to waterproof the container and, not surprisingly, traces of this material have been identified. 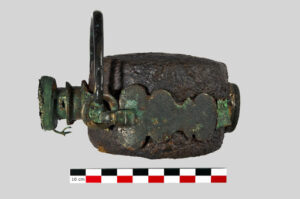 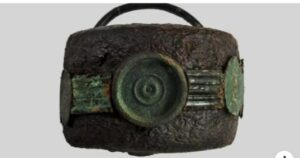 Even more interesting is how the remains of the organic content of the bottle have been preserved. According to the first analyzes, they are millet seeds (Panicum miliaceum, cereal widely consumed by the Romans) blackberries, with traces of dairy products. Perhaps he had also transported olives, given the presence of oleanoleic acid.

The laguncula was therefore also a kind of apprenticeship since it could contain solid foods. In fact, for the water, the legionaries had a specific skin bottle.

Explains military historian and experimental archaeologist Flavio Russo: This was a flask made of goatskin and had the advantage of not breaking with falls or bumps.

The external coat, if wet, allowed to refresh the content due to the subtraction of heat produced by evaporation. Its use even reached the Great War where it was called “ghirba”. By extension, “saving the stuff” began to mean, in military jargon, saving one’s life. The skin bottle also performed a very useful function: if filled with air, it constituted a real lifesaver that allowed the legionnaire to wade the waterways. skins, if used in bulk,

Returning to the laguncula, it is surprising how on the market of accessories for historical re-enactment this bottle has been present for some time now, reproduced with characteristics quite similar to the ancient one found. This allows us to appreciate how “new” it should have been.

It was certainly an object of a certain value, like all the metal ones, at the time, which the legionary had to particularly care about.

Perhaps this is precisely why she was left in one of the tombs. Maybe, the extreme homage of a fellow soldier, a friend, a brother? It is not just an archaeological find: the rust and verdigris that cover the laguncula evoke a story of pain and affection that we will never know.