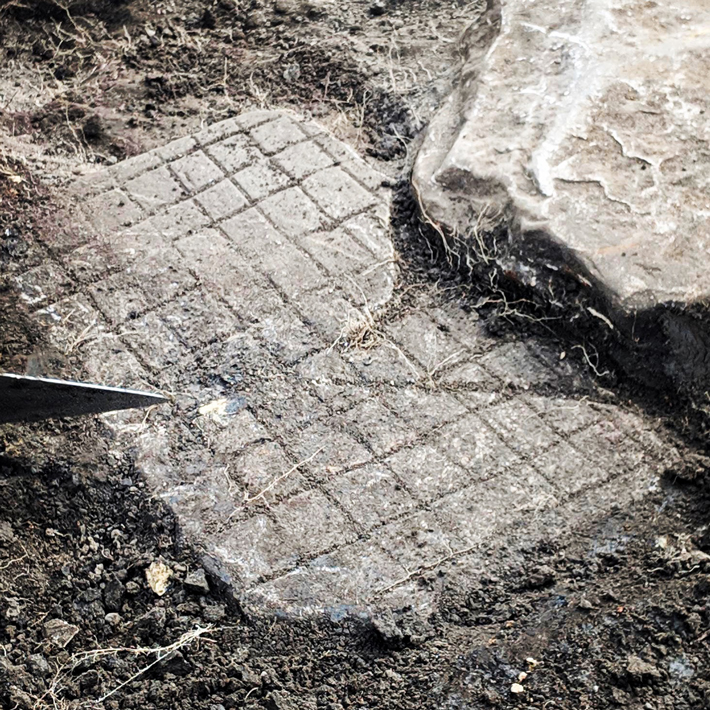 Roman Game Board Unearthed at Vindolanda

After a day’s duty on the frontier of Hadrian’s Wall, what better than a relaxing game of Ludus latrunculorum.

The game of strategy and military tactics was popular across the Roman empire, and a stone board on which it may have been played has been uncovered at Vindolanda fort in Northumberland .

This 3rd-century board was found by volunteer digger Phil Harding re-used in a floor, in a newly excavated building behind the Vindolanda bath house.

It is thought that the board would have been in use in the bath house and then utilised elsewhere after it was broken.“You can almost picture the losing Roman tipping the board up in frustration, causing it to break,” said a Vindolanda spokesperson.

A total of 5vgood examples of gaming boards have been found at Vindolanda over the years, and all date from the 3rd and 4th centuries.

Ludus latrunculorum was a game for two players across a rectangular board marked with a grid of squares. The players each have an equal number of pieces, with one player’s differing from the other in colour.

Pieces move around the board and capture one another. A piece of 1 colour caught between 2 of the other is removed from play. The winner is the player who captures all of the opponent’s pieces.

Gaming pieces, which were made from pottery glass or stone, have also been found at the fort in the past.

Meanwhile, one of the top finds from last year’s excavation season at Vindolanda has now gone on display at the fort’s sister site of the Roman Army Museum at Carvoran on Hadrian’s Wall.

The group of 4 hipposandals, found in two sets of two, had been discarded in a ditch dating to AD 140-180.

Various theories have been put forward regarding the purpose of hipposandals, including:

The most common theory is that these iron objects were a type of horseshoe. They were not nailed to horses’ hooves like modern horseshoes but were worn tied with cords.

Hipposandals could be fitted by anyone who owned a horse, with little need for specialist farrier knowledge. They could be carried easily, and just as easily be replaced and would have been useful when on remote postings or expeditions.

Some researchers believe that hipposandals are not horseshoes but could only have been used on slower pack animals such as oxen, mules and donkeys.

This would have only allowed the horse to move a few inches at a time and would have stopped pasturing horses from straying.

Hipposandals could have been used as a medicinal shoe, which could carry a salve packed in or around the iron and therefore kept firmly on the hoof and frog (the soft part of a hoof located on the underneath of the foot).

They could have also been used for offensive purposes, for example, riding into battle wearing these would have avoided painful caltrops devices scattered to make a horse lame, or for better traction on ice and mud.

The Vindolanda Trust is also appealing for public help in funding a new development at the fort, which will be used as a base for volunteer excavators and for the 1st  stage of processing finds. The Robin Birley Archaeology Centre will be named after the late founding director of the Vindolanda Trust, who for more than 30 years ran the fort site and nearby Roman Army Museum.

The design of the centre links back to the former Nissen huts which were used for education purposes at the fort in the 1970s, as well as the vaulted roof structure of the Roman bath house which is adjacent to the site.

The Vindolanda Trust has appointed Newcastle-based Napper Architects to design the new facility, which incorporates rainwater recycling. It is hoped to start construction in October.