A mudlark who discovered a rare Roman lamp during his lunch break while walking on the Thames foreshore revealed that he almost threw it away because he thought it was a fake.

The discovery of Alan Suttie is now on show at the Museum of London, along with other objects found in the capital by amateur treasure hunters. 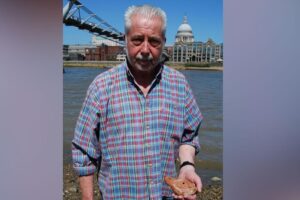 At a meeting at St Paul’s Cathedral, the 67-year-old artist stumbled down the river near Old Billingsgate Market and stumbled upon the discovery.

He said: “A wave came in, went out and there it was in the mud. The thing that I did that was very fortuitous was I spotted it and picked it up because the next wave would probably have smashed it to bits.

“I was down there just in my break from a meeting in the city with my suit and my best shoes on.

“But us mudlarks can’t help it. If we get a chance to nip down to the river we’ve got to get on it.”

The oil lamp, which was made in north Africa in the 4th to 5th century AD, dates from the end of Roman rule in Britain and has been designated an item of national importance. 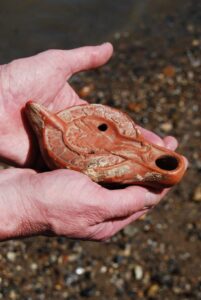 Mr Suttie admitted he almost threw it away after he was initially told it was a Victorian copy.

But this year he decided to take it back to the Museum of London “for a cheeky second opinion”. He said: “I took it in, when I took it out of my bag it all went very quiet then it all went a bit loud and it turned out to be a very, very rare late Roman lamp.”

The lamp is one of the hundreds of “treasure” finds by amateurs which end up on display in museums around the country.

The British Museum today revealed the number of treasure discoveries — which covers gold and silver more than 300 years old and other ancient objects — has hit a record level for the second year running.

According to its annual report, 1,267 finds were recorded in England, Wales and Northern Ireland last year.

Other finds presented at the report launch today include a 2,000-year-old Roman statue of the goddess Minerva which was kept in a margarine tub for a decade because it was thought to be a fake when it was first found by a metal detectorist in Oxfordshire.

British Museum director Hartwig Fischer said the record-breaking number of finds was “wonderful news for our knowledge and understanding of Britain’s past”.

He said: “To know that many previous discoveries continue to go to museums so that the public can benefit is hugely encouraging”.