1814 was a year of defeat, triumph, and ultimately, of sweeping change for many.

“The Star-Spangled Banner” by Francis Scott Key was published as a poem; the first-ever plastic surgery was performed in Britain; Napoleon Bonaparte abdicated his imperial throne and was banished to the Tuscan island of Elba; and the Treaty of Ghent was signed, ending the War of 1812 between Britain and the US.

Though the change was sweeping the globe, the Dickensian lifestyles of the poor in the early years of the 19th century remained yet untouched.

Zooming in on central London in particular, where our story takes place, we move our focus to the “rookery” of St. Giles, which Charles Dickens toured and based many of his squalid scenes upon. 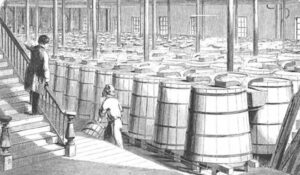 On a late afternoon in October 1814, in one of the craziest events in the history of beer, a small slum neighborhood located in the heart of London was tragically struck by a 570-ton wave of beer when a three-story vat in a brewery exploded nearby. It left a literal river of wreckage in its wake.

The Meux and Co. Brewery, which had been operating at the same location in the St. Giles Rookery for nearly 50 years, had become the city’s fifth-largest producer of beer – and they had the stock to show it.

Over one million liters of beer flooded out onto the road and raced through the St. Giles neighborhood. The area was crammed with crowded slums, and many inhabitants couldn’t escape in time.

At least eight women and children were drowned, crushed, or otherwise killed in the tsunami-like wave of beer as walls crumbled, homes collapsed, and basements were flooded.

With no proper drainage systems in place in the city, people had no other option but to wade through the depths of the muddied brew in search of their loved ones. 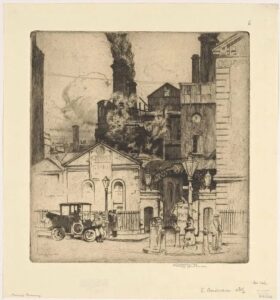 According to The Independent, “Hannah Banfield, a little girl, was taking tea with her mother, Mary, at their house in New Street when the deluge hit.

Both were swept away in the current, and perished.” Others who were gathered in a cellar for a wake were caught by surprise by the flood and drowned in beer.

A wall of a nearby pub crumbled and crushed a 14-year-old girl who was standing next to it. In total, eight people perished in the accident.

Unsubstantiated rumors persist that rowdy locals brought pots and pans to the river of beer in an attempt to round up free drinks.

In reality, though, the citizens of St. Giles were lauded in the press for their help with the rescue efforts, keeping quiet in the aftermath in order to help listen for the screams of their trapped neighbors.