James Oliver Huberty entered the McDonald’s in the San Ysidro area of San Diego with a plan: “hunting for humans.” He opened fire on the customers inside the fast-food chain, killing 21 and wounding 19 others.
The assailant’s youngest fatal victim was an 8-month-old baby. Huberty was killed by police an hour after the shooting began, yet days of mourning and investigations followed. Minutes earlier, Huberty had left home, telling his wife, “I’m going hunting… hunting for humans.”

Huberty, who had a history of mental problems, lost his job in Ohio the previous year. He brought his family to San Diego and worked as a security guard until he was fired again, a month before the shootings.

His wife claimed that Huberty called a mental health clinic to make an appointment for counseling but was never called back. Huberty had a love affair with guns, keeping a small arsenal in his bedroom. Neighbors described him as very angry.

Bringing several of these guns, including a 9mm automatic pistol and a semiautomatic rifle, into the McDonald’s two miles from the Mexican border, Huberty demanded that the 45 patrons get on the floor. He then walked around the restaurant, calmly shooting people.

He killed 20 in the first ten minutes, including four who tried to escape. There were so many shots fired that the police first assumed that there was more than one gunman inside. Firing at a fire truck that responded to the scene, Huberty also grazed one firefighter with a bullet.

An hour after the shooting began, an employee managed to escape through the basement and inform the SWAT team that Huberty was alone and without hostages. With this information, sharpshooters were told to “take him out.”

A marksman sent a shot through Huberty’s chest and killed him. After making sure that he was dead, police finally entered the restaurant. San Diego Police Chief William Kolender said, “I hope to God I never see such a thing again.”

Flowers were added to a memorial at the Higher Education Center at San Ysidro:

Thursday in honor of the victims of the mass shooting known by many as the “McDonald’s Massacre.”

Thousands of cars drive along San Ysidro Boulevard and most drivers probably don’t realize the importance of one of the buildings along the busy street.

The education center sits on the site of what was, for a time, the deadliest mass shooting in the United States.

The last active-duty firefighter who was present on that tragic day visited the memorial Thursday.

“I’ve worked through the grief, the closure and the trauma of what this event was,” said San Diego Fire-Rescue Battalion Chief David Connor. He served in the area for more than five years.

“Every time I drive by this I understand what it is. I see what it’s become,” he said of the memorial. 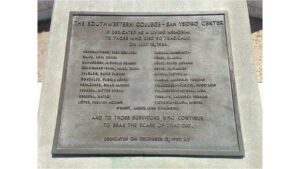 He introduced himself and embraced Connor.  As they hugged, Flores told Connor he has lived each day to the fullest since the shooting. It taught him that you can’t know what’s in store for the future.

Connor responded, “That’s what we get dealt. That’s what faith is. Faith is for a lot of things you don’t understand.”

Flores never left the area and is now an educator at Otay Ranch High School.

As for Connor, he’s slated to retire sometime before next summer.