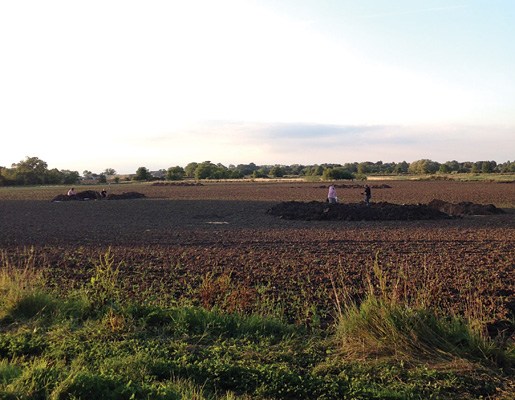 The remains of an Anglo–Saxon island have been Discovered is one of the most important archaeological finds in decades.

The island which was home to a Middle Saxon settlement was found at Little Carlton close to Louth, Lincolnshire by archaeologists from the University of Sheffield.

It is thought the site is a previously unknown monastic or trading centre however researchers believe their work has only revealed an enticing glimpse of the settlement so far.

The long ago island was inhabited continuously between at least A.D. 680 and A.D. 850, during the Middle Anglo Saxon era, archaeologists from the University of Sheffield report in the April 2016 issue of Current Archaeology.

Among the tantalizing discoveries in the region were 16 silver styluses for writing and a tablet inscribed with the female name “Cudberg” — perhaps a coffin plaque for a long ago resident.

The site is in Lincolnshire parish close to the village of Little Carlton, an area of grassy fields, marshes and small forests.

The first hint that something intriguing might be buried in this bucolic setting came in 2011, when a metal detector hobbyist named Graham Vickers found a silver writing stylus featuring decorative carvings. Archaeologists dated the utensil to the 8th century.

One little glass piece was crisscrossed with decorative, intertwined glass strands. These discovers hint at a settlement with access to life’s little luxuries.

An elaborately designed glass counter may have originally been set in a bronze bowl.

The flow of artifacts from the site grabbed the attention of University of Sheffield archaeologist Hugh Willmott and doctoral student Pete Townend, who led geophysical surveys and Lidar scans of the area.

Lidar uses laser pulses to measure and map out surface features. The data can be used to create models that show the shape of the Earth with all its vegetation stripped away.

These surveys uncovered a slight rise in the land around the area richest in artifacts. As the archaeologists moved south, where fewer antiques were found, they noticed that the land dipped.

A survey of the historical field names of the area turned up monikers like “Little Fen,” suggesting a marshy history.

All of this data added up to a image of the site as a long-ago island in a marsh, which has since been drained and converted into agricultural field.

The archaeologists found a built-up bank reinforced with wooden posts that would have been the medieval version of flood control; they likewise found the base of a 4-foot-wide (1.2 meters) hearth that was used to smelt metal, as melted bits of lead nearby revealed.

The hearth was on the outskirts of the settlement, likely because it would have been noisy and smelly, the researchers wrote.

The archaeologists additionally found signs of domestic life, including dress pins made from copper and tweezers. They even Discovered a small Anglo–Saxon coin called a sceat, stamped with a human face and dating back to between A.D. 725 and A.D. 745.

Researchers are not sure what the site was used for. It could have been a trading post, or a monastic center, where priests used silver styluses to copy out texts.

Nor are they sure why the settlement eventually faded away, however the youngest artifacts date back to the late 800s — a time when the Vikings began to push into the region.

Whether a Viking invasionspelled the end for this settlement remains a mystery, however.

Here are some Pictures from Anglo-saxon Island: