In Yunnan Province, southwest China, two dinosaur fossils from the Jurassic period have been found.

The Institute of Vertebrate Paleontology and Paleoanthropology has named the two fossils as Lufengosaurus Magnus and Lufengosaurus Huenei. 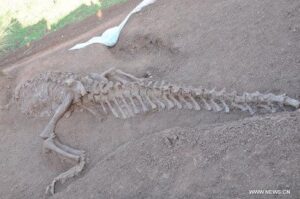 They were found last month during road work in Lufeng County, Yunnan Province.

The Lufengosaurus Magnus fossil is more than five meters long. With three sacral vertebrae, 13 dorsal vertebrae, 22 coccygeal vertebrae and complete hind legs, it is estimated to be nine meters long in full length, explained Wang Tao, director of the department for geological heritage protection under the Lufeng Land Resources Bureau. 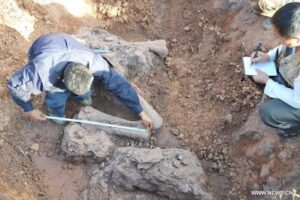 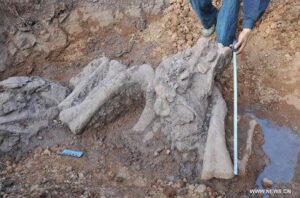 The other fossil was found just 500 meters away. It features two preserved shanks, two dorsal vertebrae and two coccygeal vertebrae.

“We will continue in situ conservation once we have built a museum at the excavation site,” Wang told Xinhua. 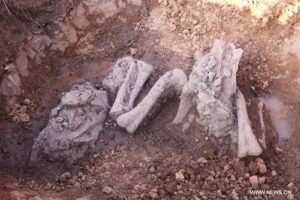 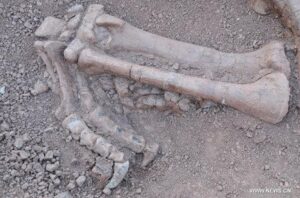 The two dinosaur fossils were unearthed in Lufeng County a month ago and they were identified as Lufengosaurus magnus and Lufengosaurus huenei, which lived about 180 million years ago. Lufengosaurus is a long-necked, plant-eating dinosaur known for its gigantic size, with adults reaching 30 feet (9 meters) long