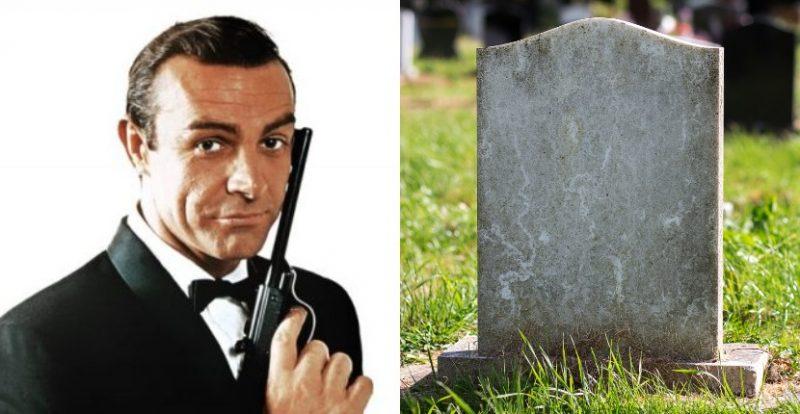 A man who discovered his deceased grandfather recently, named James Charles Bond, was a spy during the Second World War arranged to have “007” written on the man’s headstone in Swansea, South Wales, because he believes his relative was the “real” Bond.

Stephen Phillips was surprised while going through some documents to read that during the war his grandfather served under Ian Fleming, who wrote the James Bond books, as a Special Operations Executive (SOE).

“Documents found by Mr. Phillips showed Mr. Bond, who was a former metalworker, was an elite force member and worked on missions under Fleming, a former Naval commander who went on to write the James Bond books,” according to The Mirror.

James Charles Bond, from Swansea, “took his secret past to his grave” when he died in 1995.

James Charles Bond died aged 89 in 1995 without revealing to his family the truth of his past, reportedly out of respect for the Official Secrets Act. Phillips, a greengrocer from Llanelli, Carmarthenshire told the BBC his opinion was that Fleming deliberately chose his grandfather’s name for his character but also hid the truth because of secrecy rules.

“Grandfather took my cousin Jenny when she was a teenager by the hand one day saying, ‘Believe me when I tell you, I am the real James Bond.’ Nothing more was said and no questions were asked,” he said to the BBC.

“But we found out that grandad was a spy working behind enemy lines, and that in 1942 Ian Fleming put an elite team of SOEs together for a mission, details of which have not been disclosed.”

Ian Fleming himself did not mention James Charles Bond’s existence in interviews or correspondence or say he was an inspiration for the iconic character before the author himself died in 1964.

Fleming did say in interviews that he took the name from a famous ornithologist. After moving to Jamaica, Fleming said he saw the book Birds of the West Indies, written by the ornithologist James Bond.

According to the New York Times, Fleming wrote in a letter that after he saw the book cover, “It struck me that this brief, unromantic, Anglo Saxon and yet very masculine name was just what I needed.”However, a possible link to the “other” real-life Bond exists.

Ian Fleming was a personal assistant to Admiral John Godfrey and an intelligence officer in the British Royal Navy during the war. It is known that he created a special commando group to gather intelligence called AU 30 in 1942.

Based on his research, Phillips believes that his grandfather was one of the commandos. “My granddad was one of that team of six,” he told the Daily Mail. “It makes my chest pump with pride. Those guys were heroes.

Seeing the headstone standing proud recognizing grandad’s ‘007’ status and the proper birth name has been so important to our family,” he said to the BBC.

James Bond as a character made his debut in the novel Casino Royale, which Fleming wrote in Jamaica in the early 1950s. The first film was Dr. No, starring Sean Connery, in 1962. It was set in Jamaica.

The theory that this man is the “real” James Bond joins a crowded field. There are at least 20 different men who Bond aficionados have identified as serving as a possible inspiration for the character, most of them real-life spies who served British and other governments during the war.

As the Bond films went on and became less rooted in Cold War-esque spycraft, the origins for 007 have become somewhat less relevant. It is one of the longest-running series in film history.

Fleming gave Bond some of his own traits: love of drinking, gambling, golf, and women. He wrote 12 novels or stories that contained James Bond. The films have featured six Bonds, with Daniel Craig the latest.

To some fans, James Bond is an irreplaceable touchstone of Western pop culture, to others a tired anachronism struggling to find a reason to run around the world with a license to kill in the 21st century. “James Bond is really an imperial throwback,” said author Matthew Parker on the History Channel. “He projects British power in all corners of the globe.”