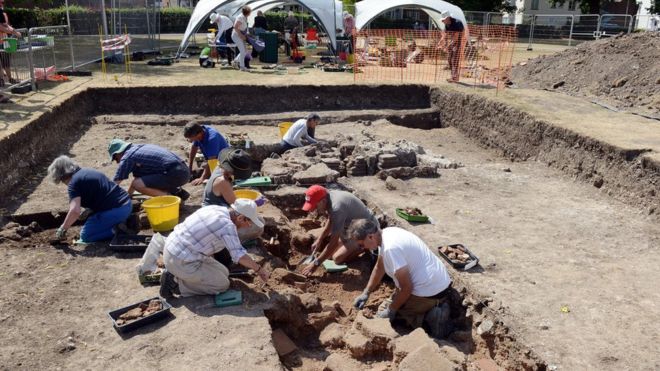 The remains of a hot tub big enough to hold 4 people have been uncovered by archaeologists in Chichester.

After the remains of 3 near-complete Roman buildings were discovered under Priory Park last year, experts suspected they would find a bath house.

A first dig at the park in West Sussex last year confirmed the theory.

A 2nd dig has now uncovered what experts have described as a “luxurious tub made from mortar, tiles and bricks”.

Chichester District Council’s archaeologist James Kenny said the size of the bath indicated it was owned by affluent people of high status.

“Just to keep it going would have required huge wealth and resources,” he said.

“It would have been filled with really hot water, and for the owner to be able to use the bath house through out the year.

It would have required staggering amounts of charcoal for the furnace, and a considerable amount of tending and stoking to keep it going.”

Mr Kenny, who led the dig with volunteers from Chichester and District Archaeology Society, said the bath house would also have had water from a mains supply.

Which would only have been accessible to the wealthiest people in the city.

The council believes the bath house to be of “national importance” because of the unusually good condition of the buildings under the park.

When they were first discovered, experts said they believed the only reason they had survived was because the park had never been built on.