Archeologists discovered a breathtaking carving of an eagle devouring a serpent under London’s streets during preparations for the site’s redevelopment into a hotel.

Reverend Professor Martin Henig, an archaeoligist, said that the artwork is “the most exquisite sculpture ever discovered in London by a Roman-British artist.”

Buried under London ‘s crowded streets for over 1,900 years, since the time Romans ruled Britain, the sculpture was incredibly well-preserved. 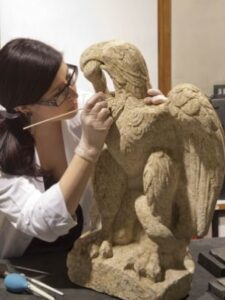 The carvings on the 26-inch calcareous eagle, including the snake’s forked tongue and the eagle’s individual feathers, were so crisp and precise that when it was first discovered, archaeologists believed it must have been a much later copy rather than an original Roman relic.

But an examination of the sculpture by experts at the Museum of London Archaeology confirmed that the sculpture dates from the 1st or 2nd century AD, and is one of only two statues of its type in the world. The other was found in Jordan in 1937. 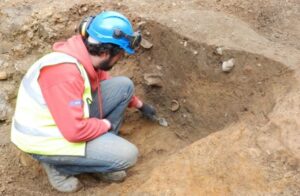 The symbology of an eagle devouring a serpent is said to represent the triumph of good over evil and in Roman art, the eagle signifies a force of good and is sometimes depicted carrying the souls of Roman emperors to the gods. It is also a symbol of Jupiter, chief of the Roman gods.

“This magnificent eagle protects the deceased, frozen in an eternal struggle to hold evil at bay. It is money and magic captured in stone,” said Caroline McDonald, senior curator of Roman London at the Museum of London.

Archaeologists also unearthed the foundations of a mausoleum nearby and it is believed that the statue of the eagle may have been placed in an alcove at the mausoleum, which would have served as a protective role if the person was a member of the ‘cult of Jupiter’ which was popular at the time.

The features of the mausoleum suggest that it belonged to a high-ranking official, merchant or army officer.

“Funerary sculpture from the city is very rare and this example, perhaps from inside a mausoleum, is a particularly fine example which will help us to understand how the cemeteries and tombs that lined the roads out of the city were furnished and the beliefs of those buried there,” Said Michael Marshall, Roman finds expert at Museum of London Archaeology.