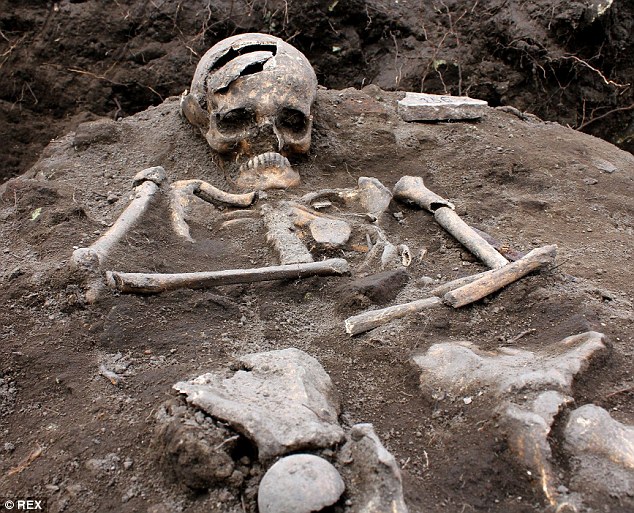 “The people buried in the graves we found were probably associated with the Roman legion – perhaps even soldiers.

This is indicated by metal parts of outfits. Interestingly, among the burial offerings there were jugs of wine – protected inside in the form of sediment on the walls” – told PAP head of excavations in Novae, Dr. Agnieszka Tomas from the Institute of Archaeology, University of Warsaw, who made the discovery with her team.

The graves additionally contained ceramic lamps and preserved elements of clothing, including metal parts of military belts and shoes – buckles and rivets. These, however, are in poor conditions, because they were consumed by fire during the ceremony of burning corpses.

Archaeologists have only found 2 graves, but in their opinion it is an important and rare discovery.

“These are the first graves from the Roman time preserved in this condition in this area” – emphasises Tomas. Until now, archaeologists only had reports of similar finds in this area found accidentally or by illegal searchers. Luck smiled on them in Novae: not only did the graves remain almost intact for nearly 2000 years, they were not touched by present day robbers.

Scientists were able to prepare a complete documentation of the find. They hope to find more burials during the work planned for 2019.

Preliminary examination shows that men were buried in both graves. In one case, where the bones were less damaged, anthropologist made a preliminary determination that the deceased was a fairly young person.

Both bodies were burnt elsewhere, and the remains were placed in wooden box, of which only iron nails have survived to this day. Equipment, including coins with picture of Roman emperors, supports the conclusion that the deceased were men.

The head of excavations added that coins with female pictures were usually placed in women`s graves.

“A coin was given for the way to the afterlife, because it was believed that the deceased would have to cross a river and the ferryman would expect payment” – explains Tomas.

The prehistorian reminds that Roman legionaries came from various areas of the Empire. Therefore, the burial rites varied – it was not always cremation.

“Interestingly, in the case of the graves we found in Novae it is possible that the cremation ritual was repeated in the grave.

The incinerated corpses with a dozen or so grave offerings were covered with large ceramic plates, forming a gablevroofed structure” – Tomas describes.

The graves found by Polish archaeologists are in the area of the remains of a civil settlement located east of the Roman legionary camp in Novae, today’s northern Bulgaria. Archaeologist received funding from the National Science Centre for surveying the area.

“The fact that Roman troops were stationed in camps and forts located through out the Empire is well known. But not everyone knows that there were huge civilian settlements around the camps and forts.

They are the focus of our research” – says Tomas. She describes that merchants, service providers and families of legionnaires and veterans lived in those settlements. They were melting pots of cultures, dialects, traditions, places of coexistence of different social groups.

In the 2nd  half of the 3rd century, when barbarian invasions intensified and the Roman Empire was in crisis, the camps became shelters for civilians, and later evolved into late Roman cities.

Dr. Tomas expedition is one of 3 Polish missions in Novae. The other 2 are the expedition of the Antiquity of Southeastern Europe Research Centre University of Warsaw headed by Prof. Piotr Dyczek and the expedition of the Adam Mickiewicz University in Poznań, headed by Dr. Elena Klenina. In addition to Polish researchers, Bulgarian archaeologist’s under the supervision of Prof. Evgenia Gencheva also work in the area.