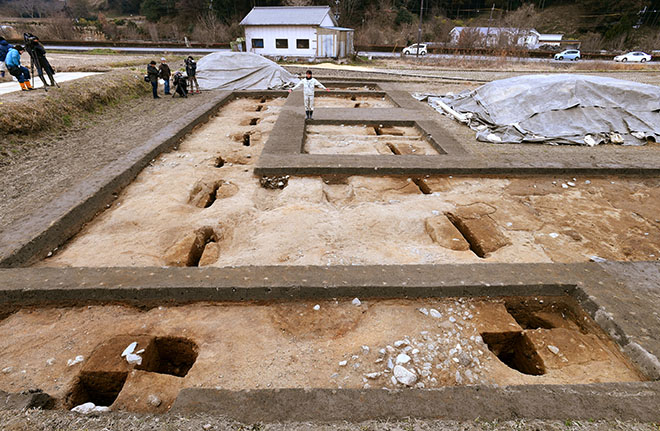 ASUKA, Nara Prefecture–Scientist found evidence of an oblong structure from the Asuka Period (592-710) that was likely part of a banquet hall complex for the nobility described in an eighth-century official history of Japan.

The building dates back to the time Asuka served as the nation’s capital, and the Asuka village government’s education board announced its existence on Feb. 21.

Scientists uncovered pits in the ground for 16 wooden pillars in the Asukadera Seiho site, which lies west of the old Asukadera temple.

The pits were uncovered in the northwest part of the archaeological site and are believed to date from the 7th century.

The pits measure between 90 centimeters and 135 cm across. The placement of the pillars suggests the banquet hall measured at least 19.2 meters west to east and 4.8 meters south to north.

The old Asukadera temple is thought to have been the 1st Buddhist temple founded in Japan.

The area west of the temple is considered to be the site of “Tsukinoki no Hiroba,” or famed square of zelkova trees mentioned in “Nihon Shoki” (The Chronicles of Japan), completed in the 8th century.

The book describes banquets held in the square in the latter half of the 7th century for people invited from the outskirts of the kingdom, including the Emishi from today’s Tohoku region and the Hayato from the southern Kyushu region.

Kanekatsu Inokuma, professor emeritus of archeology at Kyoto Tachibana University, believes “the square was a functional venue for various ritual,” adding that the discovery ties in with historical accounts of banquets hosted for the Emishi and Hayato people, with sumo tournaments put on for entertainment.

“Just how they are described in Nihon Shoki,” he said.

Tsukinoki no Hiroba is reputed to be where the young Emperor Tenji as crown prince 1st became acquainted with Nakatomi no Kamatari through a “kemari” ball-kicking game.

They connived to stage a coup in 645 that brought about the Taika Reforms to cement the power of the imperial court.

The archeological ruins of Ishigami, which yielded a stone figure, probably a fountain, are located about 300 meters north of the Asukadera Seiho site.

The Ishigami site bears traces of a facility that was enclosed by a narrow corridor-like building, which is believed to have been part of a much larger banquet complex.