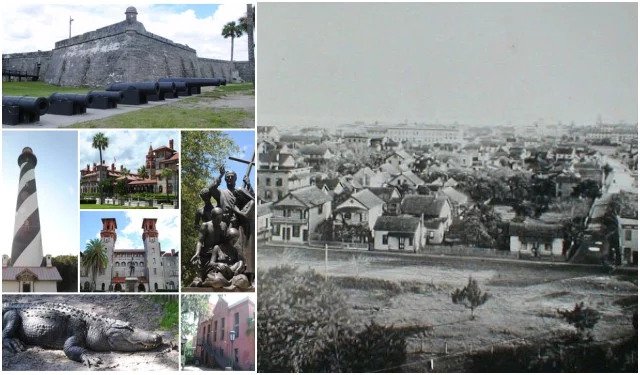 St. Augustine, Florida is the oldest city in the United States

St. Augustine is the oldest continuously occupied European-established settlement and port in the continental United States.

The city is located in the southeastern United States, on the Atlantic coast of northeastern Florida.

On September 8, 1565, Pedro Menendez de Aviles landed on the shore of what is now called Matanzas Bay and began the founding of the Presidio of San Agustin.

Later the settlement would be called St. Augustine, in honor of Augustine, a saint of the Roman Catholic Church on whose feast day, August 28, the land was first sighted.

When Spain ceded Florida to the United States in 1819, St. Augustine was designated the capital of the Florida Territory until 1924 when Tallahassee became the capital.

Pedro Menendez and his party of about 1,500 soldiers and colonists built the city on the site of an ancient Native American village and it has been continually inhabited since its founding.

Castillo de San Marcos was made of shell stone, consisting of walls 30 feet high and 12 feet thick, and was surrounded by a moat. The fort was used as a prison during the Indian Wars and was a battle site in the American Civil War.

St. Augustine was ruled by the Spanish for 256 years before James Oglethorpe, the British founder and governor of Georgia, launched a series of attacks on St. Augustine and eventually ended the power of Spanish St. Augustine. Florida was turned over to British rule.

During the Revolutionary War, the Castillo de San Marcos was converted into a prison for captured American rebels. Heyward, Rutledge, and Middleton, signers of the Declaration of Independence, were imprisoned there.

In March 1812, the US sent gunboats and troops to lay siege to St Augustine, but they were forced to withdraw when the War of 1812 broke out with England.

American troops again invaded Florida in the First Seminole War and gained control over much of the peninsula. The United States acquired the old Castillo in 1821 and renamed it Fort Marion in 1825.

Most of the historic buildings of St. Augustine are located near the Plaza de la Constitucion.

The Castillo de San Marcos is the oldest standing fort in the continental United States and the U.S. government made it a National Park in 1933.

The Bridge of Lions, built-in 1927, links the downtown with Davis Shores, a residential community dating back to the 1920s and St. Augustine Beach.