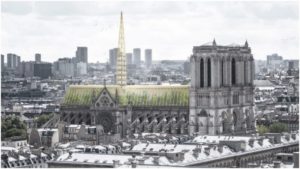 Following the fire that ravaged the roof of Notre Dame Cathedral in Paris on April 15, the French government began planning the reconstruction of the famous Parisian monument. One of the proposals includes a greenhouse roof that is environment-friendly.

According to The Independent, French prime minister Edouard Philippe has indeed invited several architects to offer plans and solutions for the rebuilding process.

Parisian architecture firm Studio NAB has submitted a design that would allow to reconstruct the cathedral’s roof while tackling climate change.

Prime minister Philippe said he intends to find a replacement plan that is “adapted to the techniques and challenges of our era.”Studio NAB founder and creative director Nicolas Abdelkader told Bustle that “even after a tragedy, it is possible to build a project sensitive to the human, a universal project in some ways.”

Bustle reports that the architectural firm’s proposal is intended by Abdelkader to spread a positive message for all, focusing on addressing the challenges of our time while fixing and preserving historic monuments.

Studio NAB described its proposal as respectful of “the original profile of the building,” but with an intent to address modern issues. Along with trying to tackle climate change, Studio NAB wants its proposal to offer solutions with regard to social inequalities. The plan involves a full greenhouse roof and a new spire that will be used as an apiary.

Beehives had been a part of Notre Dame since 2013, as reported by CNN. These beehives, located on the roof of the cathedral, were in fact spared from the fire. Notre Dame’s beekeeper Nicolas Geant said it was a true miracle that the flames did not touch the hives, which would have otherwise killed all the bees.“They weren’t in the middle of the fire, had they been they would not have survived,” Geant said in an interview with CNN.

“The hives are made of wood so they would have gone up in flames.”The joyful beekeeper explained that wax melts at 63 degrees Fahrenheit, which would have melted and trapped all the bees inside their hives if the fire had been closer. Because bees have a different respiratory system than humans and do not have lungs, the smoke could not kill any of them, Geant explained.

Studio NAB will incorporate the beehives in the new spire as part of its design. It also plans to use the burned oak wood from the fire to build its greenhouse roof, making the cathedral “rise from the ashes.”

The cathedral had been previously renovated in the 1840s, due in great part to the influence of Victor Hugo’s remarkable novel The Hunchback of Notre Dame. At that time, architect Eugène Viollet-le-Duc restored the past glory of the iconic Parisian monument, which had gone through troubled times during the French Revolution.

Viollet-le-Duc was influenced by the ideas of the Romantic literary movement, of which Hugo was a part. This movement emphasized beauty from old medieval buildings, and strongly valued monuments like Notre Dame, whose legacy had been jeopardized following the revolution.

French efforts to rebuild the cathedral were started by President Emmanuel Macron, who promised to rebuild the cathedral “even more beautiful” than it was before. President Macron pledged to finish the reconstruction within five years. According to France 24 however, many architects and conservationists urged him to slow down the process to avoid what they referred to as unintended consequences.

According to the New York Post, France also faces a shortage of skilled workers and carpenters to work on the project. As a response, Les Compagnons du Devoir, a French organization specialized in training manual workers, is now taking applications from students to help fix this situation.

While a plan for the rebuilding hasn’t been selected, Studio NAB has now submitted a modern and interesting plan for the future roof of Notre Dame. Not all agree on the best way to fix the iconic Parisian monument, but France is determined to find the resources to accomplish this task.