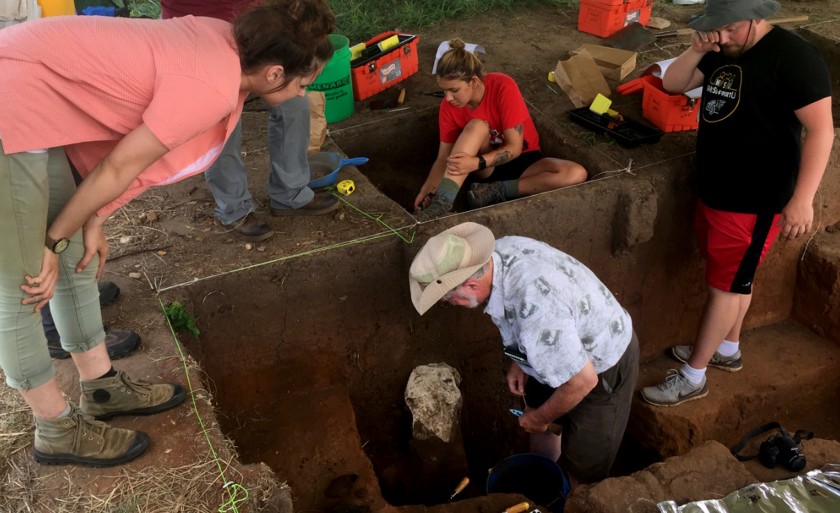 Must Read: Archaeologists explore a rural field in Kansas, and a lost city emerges

In the Great Plains of Kansas, archeologists have made an innovative and unlikely discovery: a vast town lost centuries ago.

Donald Blakeslee discovered a few years ago the lost city of Etzanoa in Arkansas City, Kan, a Wichita State University anthropologist, and an archeology professor.

In that small city in south-central Kansas, local residents found the arrowhead and the gold mine underneath their town, pottery, and other ancient artifacts, for decades, in the fields and rivers of the region.

According to the Los Angeles Times, Blakeslee used newly translated documents written by the Spanish conquistadors who came across the land over 400 years ago to determine that these artifacts were once part of the Native American lost city of Etzanoa.

“‘I thought, ‘Wow, their eyewitness descriptions are so clear it’s like you were there,’” Blakeslee told the Times about reading the conquistador’s accounts. “I wanted to see if the archaeology fit their descriptions. Every single detail matched this place.”

The city of Etzanoa is believed to have been around from 1450 to 1700 and was home to approximately 20,000 people. Blakeslee said that the city was the second-largest settlement in the present-day United States at the time and spanned across at least five miles of the space between the Walnut and Arkansas rivers.

The 20,000 inhabitants of Etzanoa were said to have lived in “thatched, beehive-shaped houses.”

In 1541, conquistador Francisco Vazquez de Coronado came to the town hoping to discover its fabled gold but instead found Native Americans in a collection of settlements that he called Quivira.

Sixty years later in 1601, Juan de Oñate led a team of 70 conquistadors from New Mexico to Quivira, also hoping to find its gold but they ran into a tribe called the Escanxaques, who told them of the nearby city of Etzanoa.

Oñate and his team arrived at the city and were greeted peacefully by the inhabitants of Etzanoa. However, things quickly went south when the conquistadors started taking hostages, which then caused the city’s residents to flee in fear.

The group of conquistadors explored the vast area of more than 2,000 houses but feared an attack from the peoples they dislodged and decided to return home.

On their return trip, they were attacked by some 1,000 members of the Escanxaque tribe and a huge battle took place. The conquistadors lost and returned home to New Mexico, never to come back to the area again.

French explorers came nearly a century later to that part of south-central Kansas but did not find any evidence of Etzanoa or its people. It is believed that disease caused the untimely demise of the population.

However, traces of the people and their city would not stay hidden forever. Blakeslee and a team of excavators found the site of the ancient battle in a neighborhood in Arkansas City and found remanents from the battle.

Locals in the area had been uncovering artifacts from the lost city for decades but didn’t understand why until evidence of the city itself was discovered by Blakeslee.

“Lots of artifacts have been taken from here,” Warren “Hap” McLeod, a resident of Arkansas City who lives on the spot where the battle took place, told the Times. “Now we know why. There were 20,000 people living here for over 200 years.” One local resident said that the sheer amount of artifacts that people in the area have is mindblowing.

“My boss had an entire basement full of pottery and all kinds of artifacts,” Russell Bishop told the Times. “We’d be out there working and he would recognize a black spot on the ground as an ancient campfire site … I don’t think anyone knew how big this all was. I’m glad they’re finally getting to the bottom of it.”

The Great Plains were long-regarded as huge, empty spaces in ancient times that were populated mainly by nomadic tribes. But Blakeslee’s discovery of Etzanoa could prove that some of the tribes in the area weren’t nomadic and were actually more urban than previously believed.

Blakeslee has also discovered evidence that similar, large-scale lost cities could be located in nearby counties which might have been around during the time of Etzanoa.