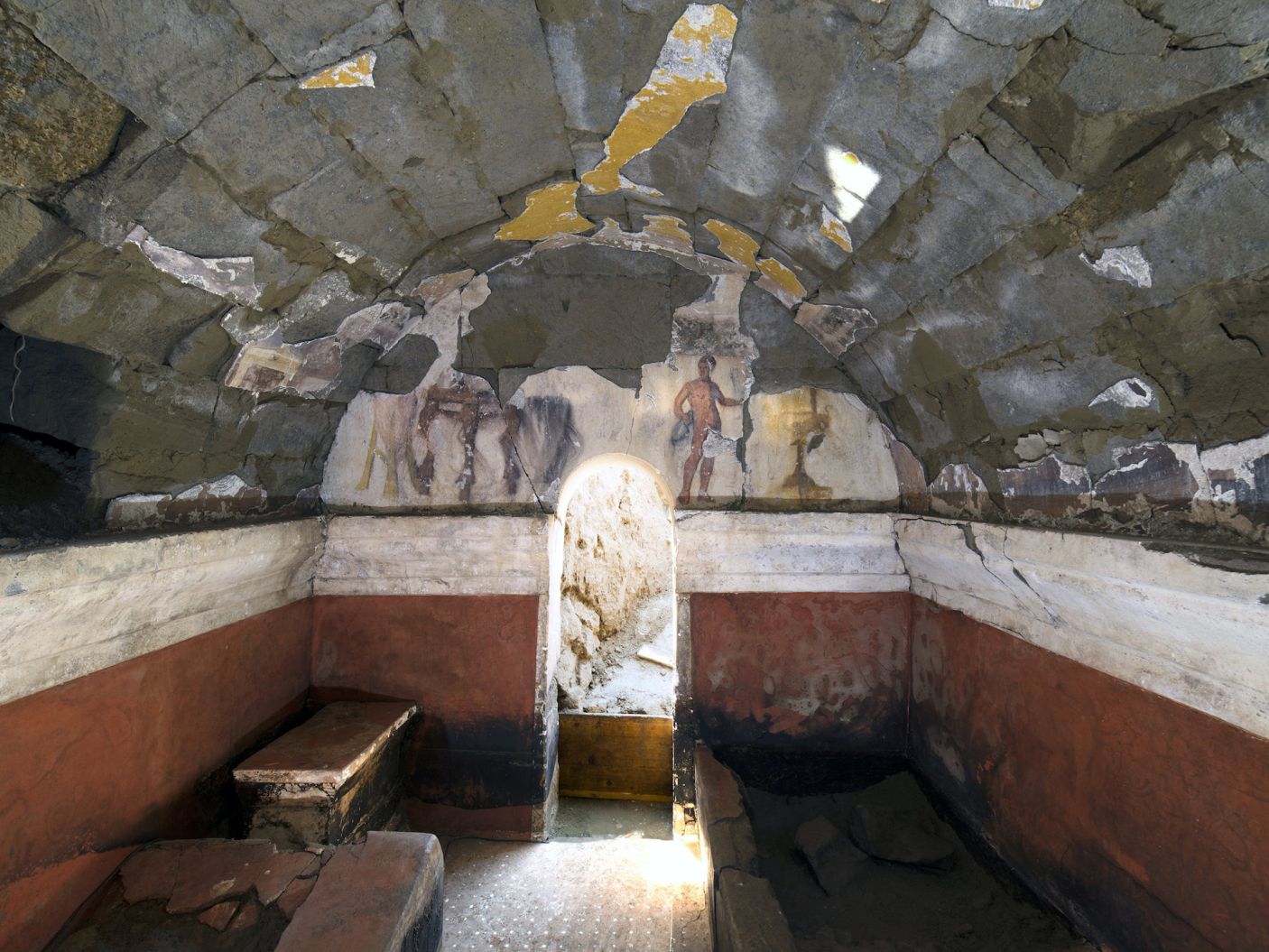 The sheer quality and colorfulness of the picture, not to mention their subject matter, indicates that the individual were buried within had belonged to the elite.

One image shows a naked servant bearing a jug of wine and a vase. Archaeologists think the other walls show guests at a banquet, not least because other element of the festive meal can also be distinguished.

About 400 tombs have been unearthed in the Cumae necropolis so far – 80 of them funeral monuments. “For this chronological phase, most of the tomb were painted white and red,” Priscilla Munzi, CNRS analyst at the Jean Bérard Center, told Haaretz.

“A tomb unearthed a few years ago had the funeral boxes painted in imitation marble (onyx). Only the tomb excavated in June was painted with figurative scenes.”

That in and of itself suggests the deceased residents in the decorated tomb belong to high society.

This decorated tomb had three beds and presumably once contained 3 bodies, Munzi says, qualifying that they have to complete the anthropological studies before they can determine that finally. Asked when the painting was likely to have been made – with the first burial inside, or possibly later, she explains, “The painting belong to the construction phase of the tomb. It is a single constructive intervention.”

The necropolis was in use from the archaic age to the early medieval period, says Munzi, who has been excavating there with Prof. Jean-Pierre Brun of the College de France since 2001.

Depicting a bare servant with a vase is relatively tame compared with that pieces, which inspired the British Museum to install a “parental guidance” warning when exhibiting it.

The sibyl and the god

As for Cumae, ancient Greek sources say it was the 1st colony town established by the ancient Greek on mainland Italy, some time in the 8th century B.C.E.

Modern scholars believe the ancients were not actually the first to settle in that hospitable seaside spot: they built on a preceding Iron Age settlement of indigenous people.

Another powerful city discovered by the ancient Greeks in Italy was Poseidonia, where archaeologist found monumental construction and precious ceramics imported from Greece, as well as unusual tombs.

Thanks to its fertile environment, Cumae would become a prosperous city controlling its areas of the coast, and growing to about twice the size of Pompeii. (Mount Vesuvius lies smack between Cumae and Pompeii).

while Pompeii and Herculaneum were simultaneously destroyed and preserved by volcanic ash emissions, Cumae was 50 kilometer from the volcano; at most, it might have suffered a dusting, Munzi says.)

This seaside hamlet, 25 kilometer or 15 miles east of the modern city of Naples on the Mediteranean coast, was also the stomping ground of the famed Cumaean Sibyl, a prophetic priestess of the Apollo cult.

While sibyl oracles were common as dirt in the ancient world, the Cumaean version reached prominence in the ancient circle of Rome possibly less because of clarity or accuracy in prophecy, and more because of proximity.

No less an ancient authority than Virgil described a visit by the Trojans royal Aeneas to the “dread Sibyl” of Cumae. Aeneas was the child of Aphrodite and ancestors to Rome founders Romulus and Remus, so he had responsibilities. While the other young men left the ship to frolic, including by despoiling the wood.

“loyal Aeneas seeks the heights, where Apollo sits enthroned, and a vast cavern hard by, a hidden haunt of the dread Sibyl, into whom the Delian seer breathes a mighty mind and soul, revealing the future.” Aeneid 6.

Once Aeneas had sacrificed the requisite animal and appeased the greedy god, the Augustan-era poet Ovid describe what happened next:

“He entered the cave of the Sibyl and asked to go down to Avernus, to find his fathers ghost.

But have no fear, Trojan, you’ll have what you desire, and, with me as your guide, you’ll know the halls of Elysium, and earths strangest realm, and the likeness of your dear father. To virtue, no way is barred.”

There is no record of what ensued, but we can say that the newly found tomb in Cumae had housed humans, and was a complex one with a series of vaulted burial chambers constructed out of volcanic tuff.

A history of grave robbing

The entrance to the tomb was sealed in the usual fashion – with a large stones. Tomb in ancient Israel were typically family affairs and had the same feature: a stone blocking their entrance, which could be rolled aside to place new bodies within, then rolled back into place to prevent predators and/or robber from helping themselves to the remains.

It did not always work. Ancient tombs are rarely discovered with nothing inside, not even skeletons, because of grave robbers – an occupation that seems to go back as many millennia as burial itself.

Cumaes dead suffered that same ignominious fate: the tombs were raided in the Nineteenth century, says the team.

Yet, even so, the archaeologist was able to recover enough human remains and traces of funerary offerings (alabaster perfume vases, bone and bronze elements of a wooden box, game dice and game pieces, and more) to date the tomb to the 2nd century B.C.E., they explain.

Especially given that the robbers disturbed the tomb, it is fortuitous that the murals were so exquisitely preserved.

To preserve the fresco, archaeologist removed it, along with fragments found on the ground, in order to reassemble the décor like a puzzle.

Perhaps Cumae was a little behind the time, or the dead had a taste for retro. The archaeologist says the subject matter of the art was untimely – about a century or two out of date.

“This is the 1st tomb with figured paintings of the second century B.C.E. that we found in Cumae,” Munzi told Haaretz. “The other tombs with paintings discovered in Cuma date back to the end of the 4th century – early third-century B.C.E.”

The scene was also “unfashionable” for its time, she says: “The theme of the banquet (preparation ceremony) is wide spread in the oldest tombs. But this is the first tomb of second century BC in Campania that documents this motif.”

Cumae was known for more than its prosperity and frightening sibyls. Come to the Christian era, the city’s gorgeous temple to the god of gods Zeus was converted into a basilica.

The city would go on to survive until the thirteenth century when soldiers on behalf of the king of Sicily would tear down its walls and destroy it once and for all.

The digs were carried out with financial support from the French Ministry of Europe and Foreign Affairs, the French School of Rome and the Collège de France’s foundations. The research was done in collaboration with the Campi Flegrei Archaeological Park, directed by Paolo Giulierini.