Mystery of ‘feminine’ skeleton found in the royal Celtic tomb

The remains of an ancient Celtic prince or princess, still found in a tomb with wealth, with a solid gold torque and sumptuous bracelets left archeologists confused.

In the Lavau district, near Troyes, the 2500-year-old royal grave, which is supposed to date to the fifth century BC, is said to have belonged to a Celtic royal family.

At the center of the tomb, in an ornate two-wheled chariot with a 580 g (1.2 lbs) golden tour decorated with elaborate winged monsters in the neck, the skeleton had been placed to rest. Also on the skeleton’s wrists were two gold bracelets and a jet bracelet around the left bicep.

But a sword was still found in the grave and indicated that the individual may have been a warrior of some sort. The body also featured delicately carved Greek vases and massive three-foot high Etruscan bronze chaudron.

However, French archeologists who carried out the excavation still have to establish the sex of the person in the grave, but believe he could have been a Celtic prince or Princess of Lavau.The unusual array of papers found next to the body has contributed to the mystery of who the belonged to.

There have been several tombs of princesses from fifth century BC found in north east France, including the Lady of Vix, which was discovered in northern Burgundy in 1953.

Archaeologists have described the latest tomb as an ‘exceptional discovery’ that resembled another found in Reinheim in Germany.

Bastien Dubuis, chief archaeologist on the dig, said:’The presence of a chariot, a cauldron and bronze crockery are three typical characteristics of a princely tomb from this period.

‘They’re well-documented funerary objects, objects of prestige. They were used in religious ceremonies and as a way to show off the power of the elite.’

The tomb was first discovered in October 2014 and made public in March 2015, but following further excavations, experts have now released more details of the riches inside the grave.

In a statement released by the National Archaeological Research Insitute in France,INRAP, it said: ‘Lying at the centre of the tomb, at the south end, the deceased rests with its two-wheeled chariot.

‘The prince is dressed in his jewellery. It sports a solid gold torque heavier than even that of the Princess of Vix’s rigid collar.

‘In his wrists, a gold bracelet, while his left bicep was girded with a lignite [jet] armband. This furniture has similarities with that of the tomb of Reinheim in Germany. 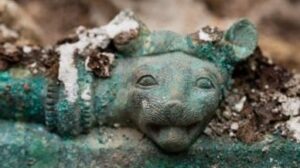 It is richly decorated with a double winged monster patter. Archaeologists found several amber beads, finely worked into a necklace or hair jewellery.

‘The tomb contains funerary deposits worthy of the highest wealthy Hallstatt elites.’ The Hallstatt Celts were a early Iron age culture that spread across most of northern Europe.

However, INRAP added: ‘The poor state of preservation of the bones means it is not yet possible to determine with certainty the sex of the individual.’

The position of the skeleton in the tomb – lying slightly on its side – has meant archaeologists have been unable to examine the pelvis without damaging the remains.

Even archaeologists involved in the dig are split over the sex of the remains. They say some of the evidence found in the grave, such as the chariot, have a distinctly masculine feel, but the skeleton itself appears more feminine.

INRAP said it appeared the prince or princess had been buried in their finest clothing, possibly a costume that had been worn for special occasions or parties.

Iron clasps and coral that perhaps held the garment together were also found and the remains of some leather along with iron rivets that sat around the neck. Lace eyelets and bronze clasps from the person’s shoes also remain.

Archaeologists say it appears the person had been lavishly clothed when they were buried suggesting they were of extremely high standing.

One of the most intriguing items in the grave, however, was the enormous bronze cauldron cast in the Meditteranean style. It is not clear whether it was buried with anything inside but experts say at some point it may have been used to hold wine.

The cauldron has four circular handles, each decorated with the horned, bearded head of Acheloos, the Greek river god.

The edge of the pot is decorated with eight heads of lionesses. Experts believe it may have been made either in Greece or by the Etruscan civilisation that lived in Tuscany in Italy at the time.

In some Celtic cultures warriors were buried with cauldrons for use in the afterlife. It is hoped the tomb may help to shed fresh light on the trade links between the Celts in northern Europe and the emerging civilisations around the Mediterranean at the time.

The Celtic prince or princess is thought to have died around 500BC – about the time when the ancient Greeks were beginning to flourish.

It has been widely assumed that the Greeks and Etrucans saw the cultures living in the north as barbarians, but the new discovery shows they may have enjoyed a close relationship.

Also found in the tomb was a black ceramic Greek wine pitcher inlade with gold, described as being ‘without equivalent’. The pitcher depicts Dionysius at a banquet lying under a vine opposite a female figure.

Archaeologists also found gold and silver sieved spoon for separating wine from herbs and spices. INRAP president Dominique Garcia said: ‘They are evidence of the exchanges that happened between the Mediterranean and the Celts. ‘Even in the rich Greek tombs you don’t find such objects.’