One of Europe’s oldest cemeteries, with graves dating back nearly 8,500 years, was discovered in 2016. The skull of a 6 month old boy and a curious upright burial of a man in the early 20s are two of the most interesting discoveries.

The German burial, named after the surrounding village of Gross Fredewalde, dates to a time when Europe was inhabited by hunter-gatherers known as the Mesolithic.

At a press conference in Berlin, excavators have confirmed that nine skeletons on the hilltop burial site have so far been found, five of which are children younger than six years. And the researchers found ample evidence that more graves remain unexcavated. 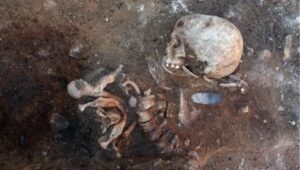 “It is rare for the Mesolithic to find several graves in one location,” said Bettina Jungklaus, a forensic anthropologist who excavated one of the remains.  “They were mobile people, ranging over the landscape.”

Excavations of the ancient crypt, located 50 miles north of Berlin, on a hill 300 feet above the plateau below, discovered in 2013 and 2014. The rugged, rough soil of the hilltop was a difficult place to dig graves. It would have been a bad spot for a village if it had no water supplies nearby.

In a paper published in the journal Quartär, Thomas Terberger, the archaeologist who led the dig, says the burials are evidence of careful planning. “It’s not an accumulation of burials by accident, but a place where they decided to put their dead,” says Terberger, of the Lower Saxony Department of Historic Preservation. “It’s the first evidence of a true cemetery in northern Europe or Scandinavia.” 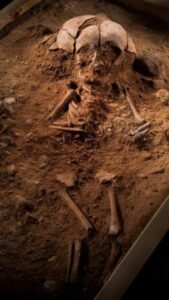 That, colleagues say, makes the spot special. “It’s a big surprise,” says Erik Brinch Petersen, an archaeologist at the University of Copenha-gen. “Hunter-gatherer people typically buried their dead right next to their houses. Here in northern Europe, a site like this is unique.”

The infant skeleton is rare, too. Researchers say it’s the earliest infant skeleton ever found in Germany, and one of the oldest in Europe. Excavators removed the fragile remains from the cemetery in a single, 660-pound (300 kilogram) block of earth, making it possible to carefully expose the 8,400-year-old skeleton in the controlled setting of a lab. “It’s really rare to find an intact burial like this, because an infant’s bones are so small and fragile,” says Jungklaus.

Laid to rest not long after it turned six months old, the baby is almost perfectly preserved, its arms folded across its tiny chest. The bones and nearby soil are stained red from ochre pigment used to decorate the body for burial.

The excellent preservation offers researchers a wealth of information. Chemical signatures in the bones, for example, could show whether the infant was breast-fed; DNA could establish links to other skeletons in the cemetery and determine the infant’s gender.

Learning more about its short life and how it died could tell archaeo-logists more about what conditions were like for Europe’s early inhabitants.

“We can look at possible illnesses,and perhaps determine the cause of death,” Jungklaus says. “Children are always the weakest link they’re the first victims when the environment or living situation changes.”

While the infant burial is remarkable, the body of a young man found nearby has excavators puzzled–and excited. Buried more than 1,000 years after the infant, the man was entombed standing up, together with bone tools and flint knives.

The man’s skeleton suggests he lived a pretty easy life. It doesn’t show signs that he did a lot of physically taxing labor. “He looks like a flint knapper or experienced craftsman, rather than the strongest boy of the group,” Terberger says. 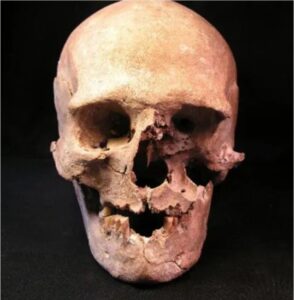 Stranger still, the vertical grave was filled in just as far as the man’s knees at first. His upper body was allowed to partially decay and fall apart before the grave was filled in. At some point, a fire was built on top of the tomb.

One possible explanation comes from hundreds of miles to the northeast. Standing burials similar to the one at Gross Fredenwalde have been found in a cemetery called Olenij Ostrov in modern-day Russia, from about the same time.

Researchers have long assumed culture flowed into ancient Europe from the south, but these odd burials suggest that there was active migration or communication across northern Europe as well. “This man is an indication of such eastern influences,” Terberger says; DNA results from his bones might be able to tease out the connections.

From early analyses of his DNA and the grave goods he was buried with, it’s clear the young man buried standing up was a hunter-gatherer, like the infant he shared the cemetery with. But he died about 7,000 years ago, meaning the hilltop cemetery was in use for more than a millennium.

His death occurred about the same time the first farmers arrived in this part of Europe, part of a process that changed the face of the continent. The overlap might help researchers understand what happened when hunter-gatherers first encountered immigrants bringing new technologies and lifestyles from far to the south. “Late hunter-gatherers and early farmers lived side-by-side,” Terberger says.

But the evidence from the graveyard suggests that relations were chilly. Archaeologists have found farmer settlements from the same time period just 7 miles (10 kilometers) away from the hunter-gatherer cemetery–but no signs that the people buried there had any meaningful contact with their neighbors. “They must have looked in each other’s eyes, but not exchanged anything–neither goods nor genes,” says Petersen.