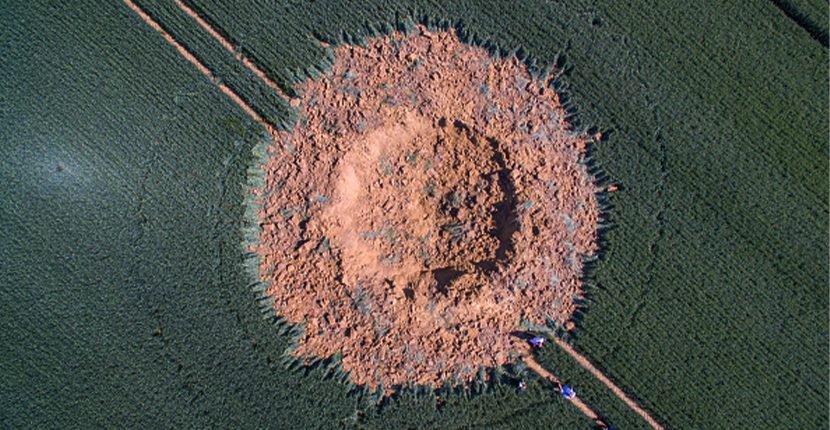 During the Second World War, a bomb fell and buried underground exploded under a German field. On June 23, 2019, a huge pre-dawn blast in a barley field had individuals worried about it being an earthquake or even a meteor crash.

But it turned out that a 500-pound second world war bomb from the 1940s was the culprit, say bomb specialists from the state of Hesse who spent a day studying the site.

The 33-foot-wide, 13-foot gouge in the earth was caused by an Allied sortie. No one in the community of Ahlbach, part of the greater area of Limburg which is just north of Frankfurt, was hurt by the blast, but the sound of it woke most people up.

“With the former railway depot, we were quite a bomb target at the end of the Second World War,” city spokesman Johannes Laubach told Hessenchau, a German news website. “We can be glad that the farmer was not in the field.”

Undiscovered bombs can often explode without outside forces acting on them, experts say. The detonators decompose over time.  Old bombs are not uncommon finds in Germany and elsewhere, with hundreds found each year, according to CNN.

At first, residents were convinced this was the work of a meteorite. But Rüdiger Jehn, of the European Space Agency, told German newspaper Frankfurter Neue Presse that this was not the case.

“A great deal of heat is released during an asteroid impact,” the ESA expert said, pointing out that no evidence of heat or melting could be seen from the crater footage.

Between 1940 and 1945, Allied bombers dropped nearly 3 million tons of bombs on Europe. “About half of that ordnance fell on German targets, eradicating Nazi war infrastructure…” said The Washington Post.

It’s believed that about 10 percent of bombs dropped over Germany failed to explode, said Smithsonian Magazine.

In the case of the bomb in the barley field, this aerial bomb was buried at a depth of at least 4 meters and had a chemical detonator, investigators said. Authorities confirmed that the bomb had exploded without any external trigger.

Not all bombs explode on impact. Sometimes chemical components were used to delay explosions until a bomb could burrow into the ground to create a bigger crater and cause more damage. Gravity was a factor with many bombs of the era.

The components relied on a north-south orientation after a bomb fell — with an air-powered fin that spun as the bomb descended. That fin drove a metal rod into a glass plate, releasing corrosive acetone that dissolves celluloid discs, according to Smithsonian Magazine.

“Different thicknesses of discs were used — the thicker the disc, the longer the process took,” said The Washington Post. “The acetone eventually dissolved them, triggering a spring that would thrust a firing pin into a detonator.” But often bombs did not land correctly, coming to rest either sideways or upside down.

In those cases, the reaction stalls and the acetone falls away from the discs, delaying the explosion for years or decades as the components decay into dangerous instability.

Wolfgang Spyra, a professor and engineer at the Brandenburg University of Technology in Cottbus, told DW that a self-detonation of a bomb from that era is very rare in Germany and only occurs once or twice per year. “In the case of bombs with chemical detonators, the materials of the detonator decompose over a long period of time,” Spyra said.

A spokesman for the arms and munitions disposal service for the cities of Cologne and Düsseldorf agreed with Spyra, telling DW that unexploded bombs in the ground “will not become less dangerous over time.”

In September 2018, a 3,000-pound bomb discovered in Frankfurt led to nearly 60,000 people being evacuated while experts defused it. In May of last year, more than 50,000 people were evacuated from Hanover after bombs were discovered during pre-construction work.